Reunited, and it won't feel good for Wood 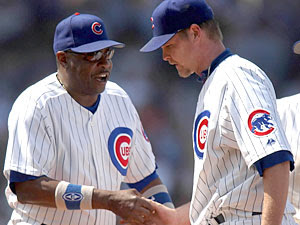 Dusty Baker congratulates Kerry Wood on a job well done after throwing 159 pitches in six innings
It looks as if Cincinnati Reds manager Dusty Baker wants to finish what he started five years ago.

Baker managed the 2003 Chicago Cubs to a National League Central Division championship and within five outs of the pennant as starting pitchers Kerry Wood and Mark Prior were abused like a rented mule or white powder in the Bobby Brown household.

Either way, one could argue that Baker's abuse of a pair of aces damaged the Cubs' chance of winning during his time at the helm. Yet, that's not stopping him from wanting to reunite with his former wounded ace.

"We have a closer already in [Francisco] Cordero, who we have under contract for a few more years," Baker said Monday. "But somebody can use Kerry Wood. I am going to call him. I like Kerry Wood as a person, not just as a ballplayer, but as a person. I will give him a call and see what's up."

I don't believe it. Dusty, if you liked Wood as a person then why did you use him so much to the point his arm turned into spaghetti towards the end of your tenure in Chicago. I hope Kerry has caller ID and turned away as soon as he saw 'Baker, Dusty' pop up.

Could you imagine the voicemail?

"Hey dude, it's Dusty. Remember, we used to be cool in the Chi? Anyway I was wondering if you wanted to play in Cincinnati. You know, white people love Cincinnati because it's really in Kentucky. Call me back, dude."

And to be honest, I'm not sure how Baker could work up the nerve to say he liked Woody as a ball player. It's tough to make a judgement like that when said player pitched only one healthy season under your watch.

Thankfully, Wood has a guardian angel. A shocking one at that in Reds GM Walt Jocketty, who once held the same position with the rival St. Louis Cardinals.

Jocketty squashed Baker's dreams of putting an end to Wood's career once and for all.

"It would be pretty tough with (Francisco) Cordero as our closer," Jocketty said. "I love (Wood's) talent. But I imagine there are going to be offers out there for him to close."

I never thought I'd see the day a former Cardinal looked out for the well-being of a soon-to-be former Cub. But it came. I guess the apocalypse is closer than I thought.