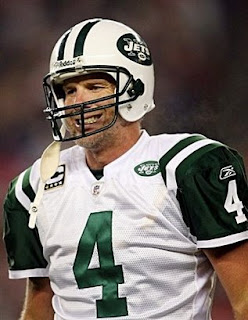 Brett Favre has tortured football fans, management and media types over the past few years as he has dangled retirement from the Green Bay Packers in front of them like a man holds a chew toy over his puppy.

Now, the drama queen quarterback is taking his act to New York City.

The 39-year-old told reporters a day after being named to his 10th Pro Bowl that, regardless of when his career ends, "I got everything outo f it that I wanted to."

"I'm well aware of the fact that there's two games left," he said at the team's practice facility in Florham Park, New Jersey. "I'm expecting us to make the playoffs, as I hope the rest of the team is, but it very well could be my last. It could be my last three games, last four games, I don't know."

When Favre went into his cowboy riding off into the sunset moods in Green Bay, the fans and media swooned and turned into butter as they hoped and prayed their hero would return for just one more season wearing the familiar green and gold. This year, Brett is wearing a different shade of green and guess what? That act ain't gonna fly in the Big Apple.

There are two games left in the season and I'm pretty sure that nutty New York media isn't going to shed a tear as Favre cries his crocodile tears as he ponders whether or not to return to the NFL. If the Jets don't make the playoffs, Favre won't need to ride out into the sunset as the closing credits commence because New Yorkers will treat him like a slice of deep dish pizza or a hot dog with mustard ... they will kick him to the curb like a crummy girlfriend and won't think twice about it.

In fact, these five sports storylines will rank higher than Favre's retirement:
The point is, Brett, you're not in Green Bay any more. So if you want to stand at a podium and play your teasing games ... call someone who gives a damn first.

And allow me to give you some words of advice that I overheard when I was in New York a month ago.

Truer words have never been spoken.