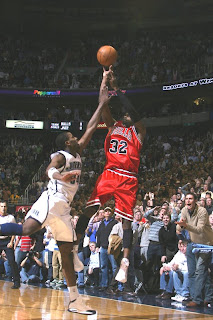 Somewhere under the Arch is a man still oohing and aahing over the collegiate career of Larry Hughes who starred at SLU a long time ago.

Shut out from the world, he believes that Hughes is an All-NBA talent who averages 20 points 5 steals and 5 assists per game and is a sure-fire Hall of Famer, especially now that he and Allen Iverson have finally clicked in Philly.

Little does that man know that Hughes has moved on, a few times at that. He currently starts for the Chicago Bulls and is a hit-or-miss talent. When he's good, it looks like he can't miss a shot. When he's bad, he misses every shot.

That man, who admires Larry Hughes, loves him some Saint Louis University basketball and is in search for the next great Billiken b-ball star.

Today's Google Scouting effort doesn't find you the next Larry Hughes (sorry) but it will bring you up to date with what's going on with the SIU Salukis' opponent in tonight's matchup.

Mascot: Billiken. What's a Billiken? Oh yeah, that guy. I'd call 'em the Fighting Michael Jackson's if this picture is any indication.

Conference: The Atlantic 10. It's strange that SLU is in the A-10 when the closest body of water is the Mississippi River.

Who to watch for: Guard Kevin Lisch is described as a sharp-shooter. He had a big game (20 points 4 assists) against SIU at the Scottrade Center in SLU's 56-51 win. That place is a house of horrors for Saluki fans everywhere. Thankfully, the game is at the SIU Arena.

Gettin' on the 'D': SLU is either defensive minded or it has faced off against some offensively anemic teams as it has allowed 58.4 points per game. If the Bills can keep the 'D' on that level, SIU -- which has allowed at least 70 points in its last four games -- will be in trouble.

The 'X' Factor: It's a regional rivalry for the schools, which are separated by a 2 hour drive. SIU features St. Louis prep stars Anthony Booker and Torres Roundtree as it continues its dominance of recruiting the St. Louis area (see: Jamaal Tatum). SLU has been able to snatch Vienna's Brett Thompson and Pinckneyville's Kyle Cassity from the backyard of Saluki Nation.

The Verdict: Apparently, this is a test for SLU, which is either taking a crash course on basketball or an opportunity for head coach Rick Majerus to go around and taste some local flavor.

If SIU wants to win, it will need to recommit to the defensive end. It's inability to get stops has hampered its ability to pick up wins late in games. The youngsters need to step up, too. I expect to see some standout performances out of freshmen guards Ryan Hare and Torres Roundtree.

Word on the street is that they might crack the starting lineup tonight against SLU. We'll see how it shakes up.

Prediction: Payback's a bitch: SIU 72 SLU 59. Prediction courtesty of the Saluki Orphan, who literally grabbed two numbers out of the air.