Sports Speak: The 'Their record isn't indicative of how good they are' Edition 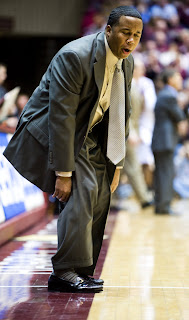 I sense a disturbing trend coming from the world of press conferences.

Yet, my alter ego (Stat Boy) cannot allow this to go any further. He is confused because numbers don't lie, right?

SIU men's basketball coach, Chris Lowery, the floor is yours.

"They're a much better team than 2-6," Lowery said. "Every game they've played has been like this. It's come down to the last possession, last shot."

Stat Boy says: With all due respect, Charlotte's 2-6 record is indicative of the team it fields on a daily basis. Of the 49ers' six losses, they have two one-point losses, a three-point loss and a five point loss.

And they're not playing the little sisters of the poor, either. The team's to have defeat Charlotte (Old Dominion, Clemson, Arizona State, Providence and Cal-State Fullerton) have a combined record of 33-14. Of those squads, Clemson is 9-0 and ASU is ranked No. 19. On the other hand, ODU is .500 (3-3), CSF is one game under the break even point (4-5).

So credit Charlotte's AD for putting together a tough non-conference schedule, but good teams find ways to turn those 'Ls' into 'Ws' because really those are the only stats that matter. But if you want to be a good team, then you have to beat good teams. If not, you're going to be an average or even below average team.

It's as simple as that.

As for the opponents in 49er victories (SIU and UNC Greensboro), they've combined to post a 4-9 record.

Oh yeah, about C-Lo's crew. The floor now belongs to the representative from Charlotte, Bobby Lutz.

"I don't think their record is indicative of how good they are," Lutz said. "I know they are the most physical team we've played this year, and we've played some pretty good teams."

Stat Boy say: Lutz might be correct on this one, as every coach that faces the Salukis comments on the physical nature in which the Egyptian Hunting Dawgs play the game.

Duke's Coach K lauded SIU defenders for being aggressive without the need to run a full court press. UCLA's Ben Howland applauded the Salukis' defensive efforts, and that's high praise coming from one of the nation's top defensive coaches. Heck, even Saint Louis head man Rick Majerus gave Southern's "D" the thumbs up in between stories of the olden days and basically calling Brett Thompson the next Michael Doleac.

Still, Stat Boy could (and would) argue that the Salukis' 3-4 record is indicative of the team that takes the court on a nightly basis.

They're young and talented as six newcomers are averaging at least 11 minutes per game, two of them start (Ryan Hare and Torres Roundtree) and Kevin Dillard was a former starter. Then there's junior forward Christian Cornelius who might as well be a newcomer as is averaging double-digit minutes for the first time in his career because he's finally shaken the injury bug.

But with youth comes inexperience. And with inexperience comes the streaky play that comes with players still adjusting to the collegiate game.

Dillard is the perfect example of Southern's up-and-down season. Illinois' reigning Mr. Basketball has had several highlight-reel moments early this season. He has dazzled crowds and defenders with a combination of flashy passes and dribbling that would make crowds at the Rucker stand and cheer. He's shooting 50 percent from beyond the arc and averaging 9.7 points per game, to boot.

Then again, he makes youthful mistakes with some passes when they go awry. Or takes shots early in the shot clock. It's the gift and the curse of young stars.

Don't get me wrong, there is plenty of basketball to be played this season. SIU has yet to even break into Missouri Valley Conference play, and that will be the ultimate indicator of where the season is going to go.

Until then, don't be surprised if this season is a rollercoaster.

(Photo credit to the best photo editor in the history of the world, Stephen Rickerl, who caught a very disappointed photo of SIU head coach Chris Lowery during the team's 66-64 loss against Charlotte).

State Boy? I didn't know you were communist.

Well played. That's why they made pencils with erasers. Or computers with the "delete" key.

who took that picture? its awesome

Stephen did. Isn't he great?