Notre Dame sucks. Its reward? A trip to Hawaii. Of course, that makes sense. 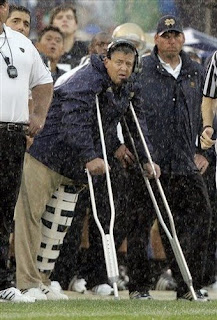 When athletes suck, they hear about it.

The curveball doesn't have enough bite. There's a hitch in your jump shot. You're not wrapping up.

And when the curveball doesn't curve, it gets hit 500 feet. The hitch in your jumper is going to drop your field goal percentage to the depths of hell. When you're not wrapping up, you end up on the wrong end of a SportsCenter highlight.

As in life, poor performances in sports get punished.

Unless you're Notre Dame, of course.

The Golden Domers were invited to (and accepted) a bid to the Hawaii Bowl (sorry, I'll leave the corporate sponsor out of it) to face the University of Hawaii.

That's right. A 6-6 season in which the team loses five of its final seven games, gets beaten by a bottom feeding Big East team and its coach is on the hot seat on the verge of getting fired gets a trip to Hawaii.

Personally I would have tried to match up Weis' Fighting Irish against Mark Mangino's Kansas team in the first ever Turducken Bowl.

But that's just me.