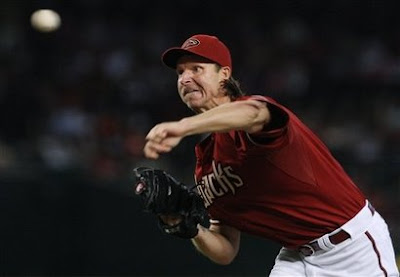 Randy Johnson is the newest member of baseball's most elderly team.
In an attempt to field the oldest team in modern baseball history, the San Francisco Giants have signed free-agent starting pitcher Randy Johnson to a one-year deal.

The aging Johnson (45) comes to the Giants with a laundry list of Hall of Fame credentials. He's a five-time Cy Young Award winner, a 10-time All-Star and has notched 4,789 punchouts. Johnson, who posted an 11-10 record with the Arizona Diamondbacks last season, has aspirations of possibly being the final modern-era starting pitcher to win his 300th game. He currently has 295.

With all that said, chalk up another questionable signing for both parties involved. Johnson joins shortstop Edgar Renteria as the second senior citizen to sign with the Giants this offseason, an offseason in which the Bay Area Bums were expected to dump payroll and go young. On top of that, I'm not sure if San Fran is the place where the Big Unit can pick up his 300th win.

Again, he only needs five 'W's' to do so, but Matt Cain (who is half of Johnson's age) notched only eight wins last season and he has more in the tank than Johnson does. Only Cy Young Award winner Tim Lincecum and Barry Zito notched double-digit victories ... and I'm not sure how Zito and his 5.15 ERA were able to manage that.

If Johnson is looking for run support, he would be hard pressed to find it even if he had bifocals and a microscope. Even Giant hitters are wondering where the offense is going to come from. The days of Kenny Lofton being driven home by Jeff Kent and Barry Bonds are over. Now it's Aaron Rowand and Randy Winn to the rescue.

Best bet is that Sabean turns Johnson into prospects at the trading deadline ... if Johnson's body can hold up that long.