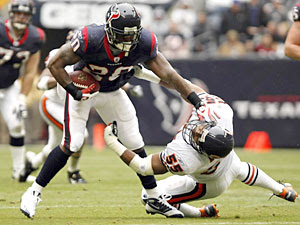 The lead in the AP story said it all:

HOUSTON (AP)—Faced with one last chance to make the playoffs, the Chicago Bears blew it.

The Bears (9-7) received every kind bounce possible for the past two weeks, starting with the Atlanta Falcons' victory against the Minnesota Vikings, carrying over to the team's overtime win against the Green Bay Packers which featured several strange bounces of balls and coin flips. The table was set for another exciting weekend of football as the Bears took on the Houston Texans with their playoff hopes on the line.

What has to bother Bears fans is that even though the Vikings beat the New York Giants 20-19 to secure the NFC North title, the other teams the Bears needed to lose, lost. The Oakland Raiders beat the Tampa Bay Buccaneers, extracting revenge for their Super Bowl loss from a few years back. Then, the Philadelphia Eagles absolutely shellacked the Dallas Cowboys.

Yet, the Bears' playoff hopes were dashed by a team posting its first .500 record in franchise history.

And how did the upstart Texans do it? By taking advantage of mistakes the Bears have been making since the season opener.

The offense started strong and looked poised to pick up its 10th win of the season as it opened the game on a 10-0 run. But that ended as the Bears' drives stalled and the Texans rattled off 21 unanswered points.

The Cover-2 defense failed to cover Pro Bowl wide receiver Andre Johnson, who racked up 148 receiving yards and two touchdowns on 10 catches, including a 43-yard TD catch in which he burned Charles "Peanut" Tillman, the Bears best cover corner.

Chicago's defense allowed Matt Schaub, Steve Slaton and the rest of Houston's offense to gain a whopping 455 total yards. Schaub went 27-for-36 through the air for 328 passing yards and two touchdowns and went untouched for most of the game as the Texans' O-Line didn't allow one sack. Slaton scored a rushing touchdown and tallied 92 yards on 20 carries.

As for the much maligned Bears offense, it wasn't terrible. But it wasn't great either.

Quarterback Kyle Orton completed 22 of his 37 pass attempts for 244 yards and two passing touchdowns. He also added a rushing TD on a QB sneak. Wide receiver Devin Hester made some major strides, especially late in the season. The former star return-specialist caught six balls for 85 yards, including a 37-yard reception that should have been called a touchdown as he was called down despite not being touched before entering the end zone.

Rookie running back Matt Forte, who reinjured his toe in the loss, closed his first season with a whimper as he rushed the ball 13 times and only gained 50 yards.

So what's next for the Bears? If you read between the lines, more of the same.

Lovie Smith believes the team is close (to what, no one is sure) and that an overhaul was not needed. Rick Morrisey of the Chicago Tribune politely disagrees with Smith's statement. As do I (which will be detailed in a blog tomorrow).

So instead of preparing for a playoff game next week, the Bears head off into the sunset with a "successful" 9-7 season under their belts.