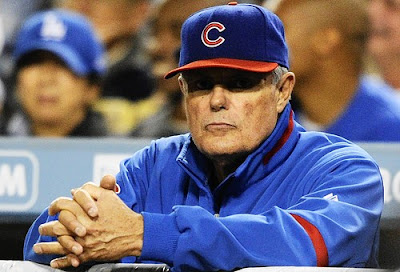 Photo Credit: Chicago Tribune
[Ed. Note: This is the first in a series of stories that I found intriguing in 2008. This series will cover a storyline from the year that was from the perspective of the Cubs, White Sox, Bears, Bulls, Blackhawks and SIU football and men's basketball. Today, I take note of another classic Cubbie choke job.]

Without a doubt, the Chicago Cubs provided the biggest tease of the 2008 season.

After being swept out of the 2007 playoffs by the Arizona Diamondbacks, the Cubs looked poised to end their 100 year titleless drought. They signed Kosuke Fukudome, a highly touted outfielder from Japan to fill the void in right field left vacated by Sammy Sosa since 2004. They cut all ties with oft-injured former star Mark Prior and inserted Kerry Wood into the bullpen to be the team's closer. Heck, they even added a former Cardinal to patrol center field and sent out some its top prospects in order to land an ace pitcher almost a month before the trade deadline.

And it still wasn't enough to win one friggin' playoff game.

The Cubs were the National League's best team over the 162 game season. The North Side Nine posted a 97-win season, which led the league, and outscored its opponents by 184 runs, better than every team in baseball.

But when the calendar turned to October, the Cubs bats went cold and their collective arms flamed out as Ryan Dempster, Carlos Zambrano and Rich Harden struggled against Manny Ramirez and the rest of the Los Angeles Dodgers en route to being swept in the playoffs again.

2009 Outlook: New Year's Day is around the corner, yet the future is still blurry. The Cubs haven't done much of anything in the offseason. They let closer and clubhouse leader Kerry Wood walk away without getting any compensation. They failed to acquire 2007 NL Cy Young Award winner Jake Peavy via trade, a deal rumored to have been close to a done deal. And they still have yet to address the vacancy in right field.

They could win their third straight division title, which is an accomplishment in its own right. But it won't mean a thing without the ring.

The good news for the Cubs is that the rest of the NL Central seems to be asleep at the wheel. And to follow an old adage about those lovable losers: "the Cubs don't have to get better, the other teams just have to get worse."