'Twas the blog before Christmas (Part One) 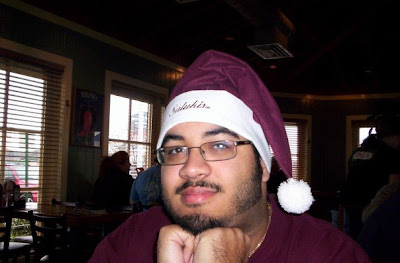 You're going to need some new friends once you step foot in New York City and no one has more friends than the Yankee captain. If Swisher follows Jeters advice, I'm sure he'll be batting 1.000 in no time.

For Chris Lowery: An offense that scores more than 63 points per game

Last season, SIU was an outstanding 17-1 in games in which it scored at least 63 points. I know C-Lo visited the Denver Nuggets this offseason and taught them the meaning of the word "defense" but maybe New York Knicks coach Mike D'Antoni could have left him a copy of his offensive playbook on his desk when the Salukis visited the Garden in November. Remember kids, you can't win if you don't score. And you can't win if the other team scores more than you do.

For Mario Moccia: A blank check from Hal Steinbrenner

Since I'm already in a New York state of mind, I figure I hop a cab (or maybe a train, it's probably cheaper) and head to the new Yankee Stadium, pick Steinbrenner's pocket and allow SIU Director of Athletics Mario Moccia to sign off on a blank check that would pay for Saluki way. And he can't tell me the economy won't allow him to do it, seeing that he has spent an estimated $423.5 million dollars on free agents this winter.

For Dale Lennon: A dollar for...

...every time he said his team needed to "sure things up."

For John Paxson: A time machine

Use it how you may, Pax. Wanna go back in time and trade Luol Deng for Pau Gasol? Or Kevin Garnett? Or maybe you would like to pull the trigger on that Gordon/Thomas/Noah for Kobe package? Or instead of drafting Thomas, you draft LaMarcus Aldridge or Brandon Roy. Maybe even Ronnie Brewer over that Swiss guard. I doubt you get anything for Christmas, seeing that you got your gift which came in June.

For Derrick Rose: A teammate he can trust

Ben Gordon's a nice shooter, but he's a chucker. Larry Hughes is a nice asset, but if he makes a few shots then he thinks he can make them all. Unfortunately, he can't. Luol Deng has regressed tremendously, but he's being paid like a future All-Star. I would get D-Rose some help. Amare Stoudemire anyone?

As usual, Jeff makes perfect sense. He's not our hoops expert for nothing.

For Greg Olson: A record deal

And some time in the studio with Lil' Wayne for the remix, baby.

1. A spot in the 2008-09 NFL playoffs.
2. A quarterback whose expertise is throwing "da bomb" and not downing Jaeger Bombs.
3. A receiver that can catch the ball as well as he catches his paycheck.

A 2007 NL Cy Young Winner and a left-handed bat who would likely hit 40 home runs at Wrigley Field alone.

For the White Sox: The fight of a lifetime

For the Blackhawks: A true 'Winter Classic'

Temperatures that are cold, but livable. A hat trick apiece from Jonathan Toews and Patrick Kane. And a 6-0 win over the hated Detroit Red Wings to cap the Winter of Frost.