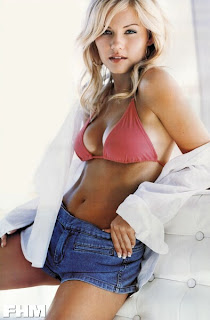 [Ed. Note: This is the fifth in a series of stories that I found intriguing in 2008. This series will cover a storyline from the year that was from the perspective of the Cubs, White Sox, Bears, Bulls, Blackhawks and SIU football and men's basketball. This post begs for you to teach me what you know about Chicago Blackhawks hockey.]

What? Did you think I was going to do all these Year In Review segment without featuring a picture of a beautiful woman.

I might be on vacation, but I still want people to read this blog.

That's why it is fitting that on the day I discuss the revitalization of the Chicago Blackhawks, I bless you the reader with the beautiful, blonde and talented Elisha Cuthbert. Also known as The Girl Next Door (great movie by the way) and better known as Sean Avery's "sloppy seconds."

Is he off his suspension yet? Just wondering.

Anyway, I will preface this blog by saying once upon a time, I truly cared about hockey. The Blackhawks broadcasted their games on 670 AM The Score and play-by-play man Pat Foley made the casual fan like myself appreciate hockey. Notice I had to listen to the games on the radio. Not because the games weren't on cable. They were. Not because my family didn't have a TV. They did.

The home games weren't on TV and those are the games that were most accessible to me and since I couldn't afford a ticket to a game at the United Center, radio was my only hockey outlet.

My, how things have changed since those days.

Pat Foley was fired, but now is back doing the radio play-by-play with WGN 720 AM. Blackhawks games are not only on TV, but are on WGN Channel 9. Yes, the Superstation carries Hard Hawk Hockey! And who is the man responsible for this?

He started as the Chicago Cubs marketing guru. He invented fan fests (the Cubs Convention started it all don't ya know) and Beanie Baby day before becoming the man responsible for finally opening up the Tribune Co.'s vaults for the Cubs to spend on free agents as he was the team's president. But when the Cubs went up for sale and McDonough's job looked like it was in jeopardy, Rocky Wirtz (who took over the Blackhawks after his frugal father passed away) hired him to be the force behind the re-birth of hockey in Chicago.

All McDonough has done has turned the United Center into the place to be for hockey. They are more marketable than ever with the combination of youth acquired through smart draft picks (Jonathan Toews, Patrick Kane) and free agency (Cristobal Huet, Brian Campbell). Oh and then there's the Winter Classic taking place on Jan. 1 at Wrigley Field.

So in the end, it all comes full circle for Mr. McDonough.

2009 Outlook: The Blackhawks represent Chicago's best hope for a title in 2009. They have 47 points (which puts them among the top four teams in the conference) and have gone 9-0-1 in their last 10 games. After firing head coach Dennis Savard early in the season, Joel Quinnville has done a magnificent job with the young Hawks.

The Western Conference is tough with the defending champion Detroit Red Wings and other talented squads such as the Calgary Flames and San Jose Sharks lurking out west. But the Hawks are talented, and to be honest, I'm looking forward to the idea of playoff hockey in Chicago.

Mr. Medina...as a big Hawks fan, i must point out that Pat Foley is the TV announcer, not radio. (that's okay, everybody makes mistakes...i just wanted to let you know and it shows that I read these things)