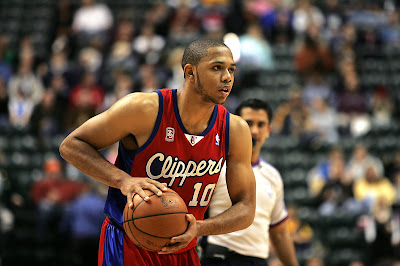 Photo Credit: Edyta Blaszczyk
In his first NBA game back in his home state, Eric Gordon was steady, if not unspectacular.

The rookie, who is only months removed from his one and only season at Indiana University. scored 15 points on only 5-for-13 shooting from the field in the Los Angeles Clippers' 117-109 double-overtime win against the Indiana Pacers. The No. 7 overall pick in the 2008 NBA draft struggled from beyond the arc, hitting only one of his six attempts. However, that bucket was the dagger that ended the Pacers' comeback hopes.

The clock ticked just under 2:00 to go in the second overtime period and the Clippers held on to a 111-107 lead as the Pacers were looking for a defensive stop to jump-start its offense, which struggled to score in the period. That's when Baron Davis drove down the lane and as Gordon's defender peeled off the young sharpshooter in a trap attempt, Davis found his backcourt mate open in the corner.

And Gordon delivered a sight that hoops fans in the Hoosier state know very well as he buried the 3-point jumper ... a dagger into the hearts of those who saw Reggie Miller do a similar act many times in a Pacer uniform.

Gordon, and the shot, came with mixed emotions. His family and friends were there, in fact, myself and TBDS NBA expert Jeff shared an elevator ride with the Gordon family earlier in the evening. They seemed excited to see their baby boy come home. I'm sure they cheered the big bucket. However, there was a subset of fans that were unhappy, not just because the home team came up short.

Behind us in the nortwest corner of press row, one fan constantly yelled "snitch" every time Gordon touched the ball. An obvious reference to Gordon's recent comments about how drug use effected the Hoosiers last season.

The former fabulous freshman, who will be reunited with former coach Kelvin Sampson in Milwaukee on Saturday night, said he and the former head of the Hoosiers still chat and he still has fond memories of his time at Indiana.

When asked about the comments he made about the alleged drug use, Gordon said he had no comment other than he regretted saying them in the first place.

Despite the recent comments, it sounds as if Gordon has grown up a little as he has traveled west to his new home in La-La Land. He talked about how "once you go to L.A., you become more attractive" and that he now has "plenty of friends" now that he's bringing in an NBA paycheck.

And what do his teammates have to say about him?

Zach Randolph had plenty of kind words to say about the former Mr. Basketball of Indiana.

"The young guy is tough. He came in here and made big shots. He's going to be great because he works hard."

If Gordon is going to be great, he will have The Baron to thank for part of it. Davis said he has embraced his role as Gordon's mentor.

"I'm just trying to give him as much leadership as possible when he's on the floor. He's a good kid and he works hard. That's what I see from a point guard's perspective. Slowly but surely, nothing he can't figure out on his own, but he's learning along the way."