This handsome, well-dressed gentleman is going on vacation 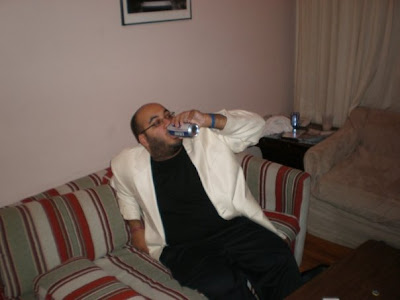 It's 5 o'clock somewhere, like here, in Carbondale where yours truly is one semester away from graduating. And man, has it been some kind of run.

Here is an abridged version of how this past year went down.

December 2007: At this time lasst year I was being recruited by Sean McGahan to join the Daily Egyptian, the student newspaper of Southern Illinois University Carbondale. Even though I wasn't guaranteed a job on the sports desk, I applied.

Later that month I got a call from the Editor In Chief, Sarah Lohman, and I was officially on staff.

January 2008: While shopping, I got a call from Jeff Engelhardt (incoming Sports Editor) asking if I wanted to join the sports desk because there was an open spot. I accepted and was overcome with joy.

And the first story I ever wrote: a preview for the Saluki Booster, the SIU track and field team's first event of the new year.

February 2008: One month in and I was loving my job. One of my favorite interview subjects has been SIU swimming and diving head coach Rick Walker. Coach Walker is always good for a soundbite, and while previewing the women's team's quest for another championship he dropped some golden words.

"We are what we are and that's all we can be, except we want to strive to be better."

I also notched my first two women's basketball stories in February as well.

March 2008: Just another month in the life of the gosh-darned boss. I'm finally easing into my role as I continue to balance school stuff.

April 2008: I have always wanted to be a baseball writer. I was able to write my first baseball story as SIU's bats went cold in a 5-2 loss to Illinois.

The first piece I could say I was 100% proud of was a feature piece on SIU swimmer Pat Sullivan, who survived cancer. A little inside story: my recorder died on my half way through the interview so I had to do it all over again two hours before our early deadline. I think I learned more in the second interview, which provided the in-depth insight the story needed.

May 2008: I closed the semester with arguably my best story, a feature piece about the global outreach of SIU recruiting when I realized that the Salukis have a lot of international athletes. It was one of my favorite pieces to research and eventually write.

However, the biggest highlight of '08 was when Matt Hartwig and I decided to launch our very own sports blog. We called it The Big Dead Sidebar. Why? It's a long story. TBDS would go on to be the home to quality writers such as Jeff Engelhardt, Brian Feldt and Stile Smith. And who knows who else is in the pipeline.

August 2008: The aformentioned Brian Feldt taps me to be his Assistant Sports Editor. To be honest, I was surprised. I didn't expect that kind of jump, but I was the only returning member of last semester's sports desk.

Oh and this kid named Stile (really?) joined us.

September 2008: My first football story. My first attempt at breaking a story. And first column.

October 2008: First out-of-state DE road trip took us to Youngstown, Ohio. SIU beat Youngstown State University 33-0, on a trip highlighted by hangman games, things that are bigger than my head, eating at Cracker Barrel twice in less than 24 hours and songs about whiffle ball bats.

My first (and only) taste of Missouri Valley Conference basketball media day. I wrote this piece about the women's team and was also able to interview Illinois State star Osiris Eldridge. An interview that just might make TBDS if I can ever figure out how to transfer audio on to the site.

November 2008: The highlight of my journalistic career to this point was the road trip to New York City with Sean McGahan and Stephen Rickerl. Sure, SIU lost to Duke and UCLA but whatever.

December 2008: Being named DE Man of the Year at the first ever Sports Desk Banquet.

Well folks, that's it for this semester, but allow me to talk a little about next semester.

I have quite the challenge ahead of me next semester. Not only will I be attempting to graduate in May, but I will have to balance my educational priorities with those that come with being the DE Sports Editor. Unfortunately, I will no longer have Brian and Stile to lean on as they will make the move to the campus desk. I don't think we could have survived without each other this past semester, but I know we will do just fine wherever we end up come January.

I know it's not Thanksgiving anymore, but thanks go out to:

And a really BIG thanks to Brian Feldt as my closing note. If it wasn't for Brian, I would not be where I am today. His departure last January for an internship allowed me to step in at the sports desk. Then he tabbed me to be his Asst. Editor. And now his departure to become Campus Editor has allowed me to fulfill a dream and that's to be the DE Sports Editor.

I too need to plan a vacation trip to overcome work stress, will visit Southwest Airlines for best online deals on travel.