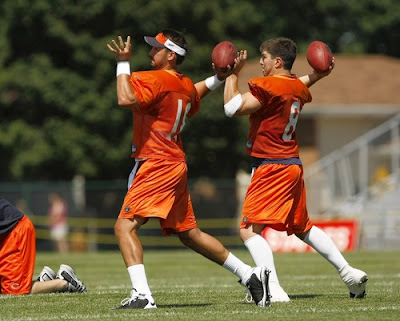 Photo Credit: Chicago Tribune
[Ed. Note: This is the third in a series of stories that I found intriguing in 2008. This series will cover a storyline from the year that was from the perspective of the Cubs, White Sox, Bears, Bulls, Blackhawks and SIU football and men's basketball. This post takes a look at the Bears season full of teases and disappointment.]

The Chicago Bears were destined for failure after winning only one of its four preseason games.

With no offensive tools, a rookie running back and a patch-work offensive line the Monsters of the Midway had weren't expected to compete.

And while the football world expected the worst out of the Bears, they defied odds and posted a 9-7 record in 2008. However, it wasn't enough to secure a division title or playoff berth. Because while a 9-7 record indicates the team won more games than it lost, the season was not a success.

The Bears have no one to blame but themselves for falling short of their playoff goals as they had ample opportunity to win games that were winnable. Instead, Chicago snatched defeat from the jaws of victory.

The Monsters dropped three of four games to NFC South opponents, hampering their playoff chances early. In the Week 2 loss to the Carolina Panthers, the Bears blew an early lead before losing 20-17. In the Week 3 loss to the Tampa Bay Buccaneers, Charles Tillman's lack of discipline and the defense's inability to stop Brian Griese soured the Bears home opener in a 23-20 overtime loss. Quarterback Kyle Orton connected with Rashied Davis (yes, he caught a ball for once) with a touchdown pass with 11 seconds left against the Atlanta Falcons and looked to get over the team's slump against teams from the south. Instead, a squib kick, a Matt Ryan deep pass to Michael Jennkins and a Jason Elam field goal as time expired cost the Bears another game in a 22-20 defeat.

When it came down to it, the Bears failed because of three things:
Since head coach Lovie Smith came to town, his Cover-2 defense has not been able to gameplan or stop another team's star. Steve Smith burned the Bears in a home playoff game. Remember that? Reggie Wayne torched Chicago in the Super Bowl. Remember that? Roddy White, Bernard Berrian and Andre Johnson torched the Bears this season. Everyone with any football intelligence knew where the ball was going, except the Bears.

The scheme's the thing that might be holding the Bears back.

The Packers defense struggled against the run, pass or any offensive motion. And the Bears scored only 23 points in two games against the Pack. They were unable to take advantage of Charles Woodson playing safety. The Texans played without their best pass rusher the entire second half. You might have not known that as the broadcasting crew gave more updates about the Patriots conquering the winds in Buffalo than why Mario Williams wasn't playing. With that said, the Bears offense still couldn't get out of its own way for most of the game.

If you see the defense's best player off the field, you attack that side, right? Not the Bears.

2009 Outlook: Maybe missing the playoffs will benefit the Bears in the long run. Maybe it will serve as a slap in the face to Jerry Angelo and the front office who might now notice the clear holes this team has. The team could possibly come back with more fire and motivation than ever before.

The Bears have a shopping list even Santa Claus things is long. A real quarterback. A running back that can give Matt Forte a breather once in a while. Not one, not two but at least three wide receivers with the ability to stay healthy, run good routes, get separation and catch the ball. An offensive scheme that takes advantage of athletic ball players and a defensive scheme that doesn't limit a talented defense that was once considered among the league's best.

With the potential for a lot of turnover this offseason, one thing seems certain: "Kyle is our quarterback."

look at that ass on orton. he's hot