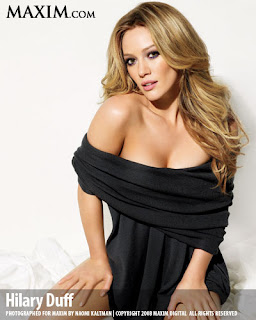 Being on vacation should allow me to do more blogging, but sleeping in 'til 10 a.m. isn't going to help. So today you get a special edition of Daily Dosage. You can commence the cheering.

Hilary Duff is all grown up now ... and that's why she's today's eye candy. It's OK guys, she is of age ... which might deter some of you. Not me, I like not going to jail.

It's been a while, but it's like riding a bike. On with today's Dosage!

Rose wilts in Charlotte. Because all of headlines involving Derrick Rose can't be about how good he is, right? Rose is having a spectacular rookie campaign (17.7 points 6.3 assists) but struggled Tuesday night in the Bulls' 110-101 overtime loss to the Charlotte Bobcats. He scored six points and dished seven assists, but five of his shots were blocked including his final attempt in regulation.

Had he passed it to an open Drew Gooden, Chicagowould have had an open dunk and maybe a victory.

The Bulls return to the United Center tonight (weather permitting) to host Baron Davis, Marcus Camby and the L.A. Clippers.

Hawks hang a loss on Edmonton. Look, I don't know much about hockey, but I do know you're doing something right when you score 9(!) goals in a game. Only one player (Troy Brouwer) scored two goals in the 9-2 rout of the Oilers. The balanced effort has helped Chicago earn a 6-0-1 record in its last seven games (including a five game winning streak) and is streaking as it heads into the Winter Classic at Wrigley Field on New Year's Day.