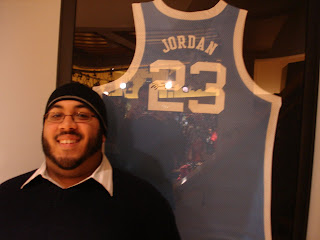 I don't think they call it the ACC/Big Ten Challenge because it is a challenge for the Big Ten to play competitive basketball against its ACC foes.

They should just call it the ACC/Big 10 Mismatch.

That's 10 straight "Challenge" victories for the Atlantic Coast Conference, capped by No. 1 North Carolina's 98-63 drubbing of No. 12 Michigan State. Ramses wiped the hardwood floor with Sparty in the 35-point win for the nation's top team.

And for the first time this season, fans Ford Field was treated to an offense that isn't allergic to scoring.

Hey, the Heels are playing in Chicago this December. Maybe Ron Turner can note that outscoring your opponent is not a bad thing.

So a friend of mine dropped me a Facebook message after the game and asked me if I regret not going to UNC and taking my crack at sports journalism with the opportunity to cover Roy Williams (who still doesn't give a sh-t about North Carolina).

Sure, partying on Franklin St. with the Carolina coeds would have been great, it wouldn't have been cost efficient.