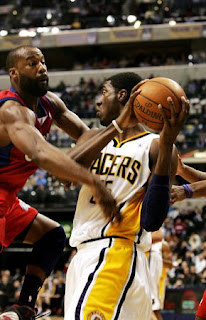 Photo Credit: Edyta Blaszczyk
So I just had the thrill of covering my first ever NBA game, a longtime dream of mine, and it couldn't have gone better.
The Los Angeles Clippers and Indiana Pacers battled in a double overtime game that resulted in the Clippers winning 117-109 at the Conseco Fieldhouse. I was treated to an awesome media room, locker room interviews with Baron Davis and Zach Randolph and a surprise appearance by Indiana University coach Tom Crean.
While the night went perfect for me, it could have gone much better for Indiana coach Jim O'Brien.
The game was going great for O'Brien and his Pacers as they were able to take a slight lead in to halftime despite playing without superstar Danny Granger. Roy Hibbert had 10 points and had not missed a shot going into the locker room. He was setting great screens for Jarrett Jack who ended the night with 27 points.
So with Hibbert playing great basketball and the Pacers finding their confidence without Granger O'Brien does the logical thing and lets Hibbert play some more.
WRONG
Maybe O'Brien was just so accustomed to the Pacers' frontcourt struggling that he got scared of Hibbert's success, but Hibbert only played the first half of the third quarter and did not see the floor for the fourth quarter or the 10 minutes of overtime.
O'Brien being scared of success would be a better reason for not playing Hibbert than the one he offered at the post-game press conference. O'Brien said he did not play Hibbert because he had two rookies in Josh McRoberts and Brandon Rush out on the floor and he wanted to keep Rasho Nesterovic out on the floor for experience.
Sure, experience is important to have on the floor, but there was an easy solution I am confident any coach at any level could have seen. Take out McRoberts and put in Hibbert.
The philosophy with big men in the NBA really isn't all that hard. In fact, you learn it at a very young age. When I was a child I would play the game Hungry, Hungry Hippos. The point of the game was to get your hippo to "eat" the most marbles.
Well when O'Brien has a big guy dominating, he needs to feed him the ball. With Christmas right around the corner I think I will give O'Brien Hungry, Hungry Hippos so he can start with the basics.
Taking Hibbert out did not only hurt the frontcourt, but it hurt the backcourt as well. Jarrett was no longer rolling off the screens and hitting mid-range jump shots. Instead, he was rolling off psuedo screens from McRoberts and Nesterovic and then passing back to them where they would ultimately miss an 18-foot jump shot.
It's a frustrating coaching blunder because the Pacers could have won the game had they made the right personnel decisions. I too was critical of Hibbert when he first came out of college. I thought he would be too slow or not conditioned to play a full NBA game. But when he came out and tore up defensive ace Marcus Camby with his baby hook shots from both hands, he had me believing in a bright future.
The Pacers are not going anywhere quick. O'Brien needs to see the potential in his young center just like he has seen it in rookie Brandon Rush. Rush played 54 minutes compared to Hibbert's 22.
If O'Brien goes with players like McRoberts and Nesterovic over Hibbert, he could become just another number in the NBA coaching guillotine.