Hey yo Devin, where you at? 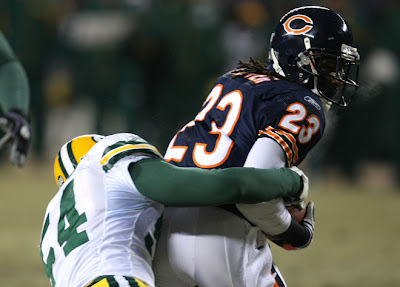 Photo Credit: Getty Images
I remember when there was a saying around the Chicagoland area that warned Bears fans not to give a gift to Devin Hester because all he would do is return it.

As I chill out in my parents basement, I can't help but wonder where Hester's ability to return anything and everything has gone. A year ago, he was a sure-fire Hall of Famer as a kick returner, which was simply unheard of. In a mere two years, he was the greatest return specialist in the history of the NFL. 11 return touchdowns, not including the longest return of a missed field goal in the game's history.

There was a time where Devin Hester was the Chicago Bears offense. It now looks as if that time as passed.

Save for the New Orleans game where it seemed as if Ron Turner had a page of his playbook dedicated to Hester drawing pass interference penalties, Hester has been seen more on milk cartons than he has on SportsCenter's Top 10. And so far, that is the extent of Hester's production since he has moved to become a full-time wide receiver.

This season he has tallied 40 catches for 580 yards and three touchdowns. Decent numbers for a middle of the road receiver, but those numbers ain't gonna cut it when you were pegged as the most exciting person in Chicago football since Gayle Sayers. Football experts (a.k.a. talk-show callers) blame Hester's struggles on his inability to learn complex routes on the fly.

And even though it seems like the easy route to take, I blame the coaching staff. Everyone with an ounce of football knowledge has heard the rumors of Hester's extremely ridiculous allergic reaction when he comes close to a complex playbook. And there isn't a skill position more difficult to pick up than being a wide out.

Those are routes I know only because of my extensive knowledge of the Madden NFL playbook.

I always thought The Windy City Flyer would be best served as a scat back. Run him on a sweep. Throw him the ball in the flats. Screen him left. Screen him right. Run him on a draw. Being a running back could have allowed Hester to get the ball with more open space without making take what would be the equivalent to the Harvard Law exam.

I'm not doubting Hester's talent. His speed, agility and athletic ability alone should make him a productive NFL receiver sooner rather than later. But he needs to refine his game.

He's waiting in the backfield for someone to throw him money.