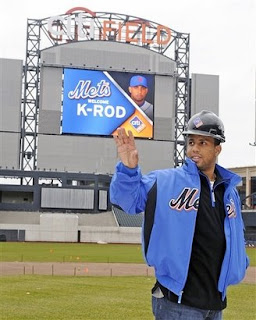 I guess I'm the only one bothered by New York's baseball teams crying poor, then spending a combined $198 million on a pair of pitchers.

However, that boatload of money has got me to thinking which player will get the most bang for their buck. And I know when people talk about Most Valuable Players pitchers usually get the shaft, but CC Sabathia (7-and-$161 million) and Francisco Rodriguez (3-and-$37 million) could make a case to be the most valuable players on their respective teams.

Here's the tale of the tape:

CC Sabathia will replace Mike Mussina at the top of the rotation, but that doesn't mean the Yanks are playoff bound just yet. The large lefty won 17 games last season, splitting the season with the Cleveland Indians and Milwaukee Brewers. That's three games less than what Mussina did in his final season in the Bronx.

Meaning if everything stayed the same, the Bronx Bombers would still be bummed watching the playoffs on big screen TVs at their deluxe apartments in the sky.

However, the Evil Empire is focused on what the Indians and Brewers did while Sabathia was acing their staffs. And that is make the playoffs.

The New York Mets have missed the playoffs the last two seasons for one reason and one reason only. Their bullpen was horrendous. Mets pitchers were so bad, they made me get out of bed, grab a ball and start working on throwing a curveball again.

Unfortunately, Omar Minaya and I could not come to terms on a deal.

However, Minaya was lucky enough this offseason to have closer Francisco Rodriguez, fresh off a record-breaking season, on the open market. It was a match made in heaven from the get-go. The Metropolitans were looking for a closer to seal the leaks in the back of their bullpen and Rodriguez was looking for a payday.

And even though K-Rod won't see Francisco Cordero money even though he's 100 times better than Coco Cordero, he will see what comes with being the stopper in the Big Apple up close and personal.

So what's more important: A guy who can save the bullpen with complete games or the guy at the end of the bullpen saving the games?

The answer, well, if Philadelphia Phillies GM Ruben Amaro Jr. was to vote on the issue, it would likely go to Sabathia after this comment:

"I don't think it affects us much. They've had Billy Wagner, and we still beat them the last 2 years in our division."