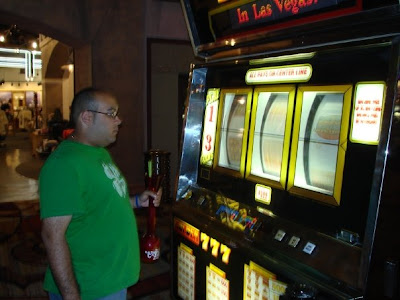 After I left that machine, Brian Cashman hit the jackpot
There is really no reason to leave bright lights and loose women of Las Vegas for San Francisco.

Unless of course you are Yankees GM Brian Cashman, who apparently took the jackpot he won at a slot machine yesterday and left it on the front porch of CC Sabathia's door with a note that said "CC you in New York."

Sabathia is rumored to be close to signing a 7-year, $161 million deal which blows out any offer anyone made and could make. Heck, the Yankees opened the bidding at 6-and-140 and Sabathia didn't jump at it immediately. So what did the Bronx Bankers do? They decided to outbid themselves because they wanted to make a splash now.

But it's hard to say yes to a hometown discount that the Brewers put on the table (5-years, $100 million) when the baseball's most beloved/hated franchise is offering you $61 million more. And while the the beer and brats of Milwaukee are tantalizing, $61 million could buy a lot of that oh-so-cheezy New York style pizza.

And in these economic hard times, there are two things that are on my mind when thinking about this deal: