Wrapping up the semester that was 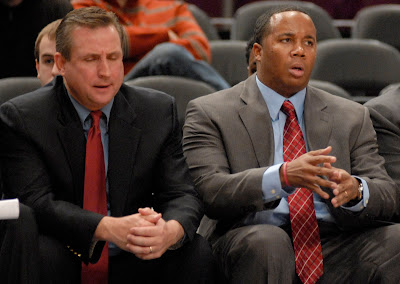 All good things must come to an end, and that's unfortunate because I have loved my time at the DE this semester, and really, this year.

But let's just focus on this semester, shall we?

The semester began with one big question mark: who was going to be the SIU football team's starting quarterback. Whether it was Joe Allaria or Chris Dieker, whoever won the job had to fill in the gigantic cleats of Nick Hill and Joel Sambursky.

I though Allaria was an easy choice early because of his athleticismm, but Dieker impressed with his grasp of the offense and ended up winning the job and leading the Salukis to a Missouri Valley Football Conference title.
The Cubs-Cardinals rivalry is a heated one, no doubt. But mix in some college kids and a little booze and things really get testy. On what was a slow day in SIU sports, Brian Feldt and I mixed it up over our favorite baseball teams. P.S.: Yes, dueling columns are fun.

You know what else is fun? Superstitions. I would go on the record and say that Stile Smith was our Rookie of the Year and MVP because without him, who knows how the sports desk would have shaped up. His superstitions story was one of the best pieces any of us have written this semester.

Nothing says football like the relationship between a coach and his quarterback. The 1983 National Champion SIU Salukis were no different. Quarterback Rick Johnson and head coach Rey Dempsey led the Salukis to their success and no one is sure they could have done it without one another.

Oh yeah, Johnson and Dempsey were on the sidelines as sophomore kicker Kyle Dougherty nailed the "kick heard 'round the 'dale" in SIU's 27-24 win against No. 5 Northern Iowa.

The SIU men's basketball team was tabbed to finish second in the MVC, thanks in part to the return of head coach Chris Lowery, senior point guard Bryan Mullins and a highly touted freshman class. Only time will tell how it all shakes out. We aren't even in conference season yet.

With a stout 3-4 defense, the SIU football team had little trouble stopping teams who were one-dimensional running squads. However, the Salukis struggled at times against potent passing attempts. Enter stage left South Dakota State University quarterback Ryan Berry, the Valley's most prolific passer. But it was a late interception by James Wheeler that sealed the win for the Dawgs.

The game of the year might have been the Salukis' final regular season game as a Ryan Kernes overtime touchdown catch clinched a share of the MVFC championship and the automatic bid for the playoffs. Even though I wasn't there, it was cool to get the text message updates towards the end of the game.

Oh, and there was that trip to New York City. These are all memories I will never forget.