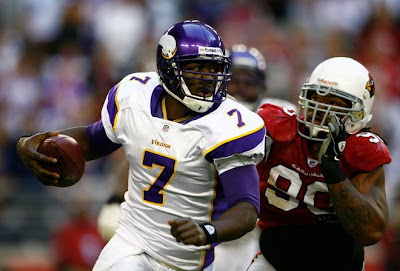 But don't be making room for his Hall of Fame plaque (or yellow jacket) just yet. This is the same Tavaris Jackson that was benched in favor of Gus Frerotte. And before you give me the whole "look at his last six quarters" argument, sit down and shut up.

Go to espn.com or any sports/news website and take a look at the last two teams the Vikes have lined up against. Careful research shows that Minnesota has taken on the Detroit Lions and Arizona Cardinals.

Sure, the Cardinals are NFC West champs and are going to the playoffs for the first time since Jake Plummer miraculously sent one of the NFL's laughing stock franchises postseason bound back in the days when the U.S. President was more concerned about late night fun in the Oval Office than shoes flying at him. But their defense still sucks.

As for the Lions, they're 0-and-14 and have allowed offenses score as if they were the Washington Generals and their opponents were the Harlem Globetrotters.

And I know that Jackson has looked confident in his last two outings ... but remember ... Lions and Cardinals. It's not as if he was going up against Mike Singletary's '85 Chicago Bears or Ray Lewis' Baltimore Ravens championship team.

Heck, I would be confident if I lined up behind All-Pro guard Steve Hutchinson with super-duper star Adrian Peterson as my deep back, Bernard Berrian as my deep threat and Vinsanthe Schiancoe as my wing man at the bar.

Especially if I was going up against the Lions and Cards.