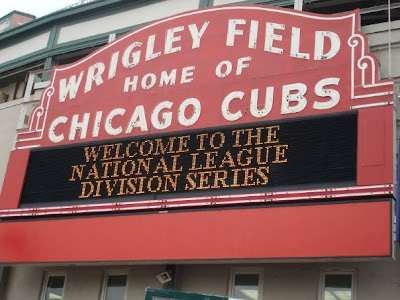 Wrigley Field will be "iced out" this winter. Makes sense. The Cubs' bats have been cold since October.
All this talk about the Chicago Cubs not having money to take on Kerry Wood's salary arbitration or Jake Peavy's remaining contract would all be shelved if the powers that be that run baseball's favorite choke-artists dipped into the revenue stream known as Wrigley Field.

Not only is the Friendly Confines on Clark and Addison hosting the Winter Classic NHL game between the Chicago Blackhawks and Detroit Red Wings, the rink the teams will skate on will be open January 4 so you can skate on the infield where Aramis Ramirez, Ryan Theriot, Mark DeRosa and Derrek Lee booted away NLDS Game 2.

Tickets were $10 and proceedes benefitted Cubs Care (a charitable organization) but if the folks that ran the North Siders kept it open for a week and charged Chicagoans a similar price while opening its concession stands to sell some hot dogs, nachos (extra hot peppers, please) and a few Old Style's, they could rake in enough dough for Peavy and Milton Bradley.

Oh, and that were that I dropped in there wasn't a typo.

Tickets for the event are already sold out according to WSCR 670 AM in Chicago.