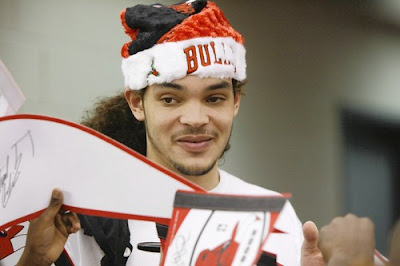 All Bulls fans want for Christmas is a post-player with offensive skills.
The play of rookie point guard Derrick Rose has erased my issues with him being selected over forward Michael Beasley with the No. 1 overall pick. However, the play of Joakim Noah and Tyrus Thomas has not.

Thomas and Noah have struggled so much this season, the Bulls have gone with a college-esque starting lineup that features three guards. And while Chicago currently stands one game under .500 (10-11) and would be the Eastern Conference's No. 8 seed if the playoffs started today (they don't, not even close) it is no thanks to the powerless towers.

It might be too soon to call it, but I'm willing to stand up and call it the way I see it. Noah and Thomas are flat out busts.

"They're young and have to find their way. When you're on the court, you have to value those minutes. The guys who are focused, know their role, commit to it and come with effort every day will play. I can handle mistakes. But I can't handle lack of effort. And I can't handle lack of commitment to the team. Those guys know that. They're working better. That's always a work in progress with a young team."

Vinny is sounding a little like a man I cover on a daily basis, SIU men's basketball coach Chris Lowery, who constantly stresses the value of the ball and playing time to his young players.

In Thomas and Noah's defense, it's kind of hard to value the ball when you can't get your hands on it. And that's not an indictment on D-Rose, but it is an indictment on the hands of stone possessed by two of the Bulls' recent top draft picks.

For me, Thomas' issues are effort-based. He's an athletic son-of-a-gun who has a penchant for highlight reel dunks and shot blocks. But it's obvious when you see him in the game that he only makes an effort when he feels he is going to make SportsCenter's Top 10.

As for Noah, he's just short on talent. Plain and simple.

I can see him being a half-decent big man who provides energy, defense and rebounding coming off the bench. And that's fine and dandy, but that's not the kind of player you choose with the No. 9 overall pick.

Joakim the Joke is actually doing worse than T-Squared when it comes to production. Noah is averaging 3.3 points and 5.6 rebounds per game. But he has these flashes, like against the New York Knicks where he swats four shots and grabs five rebounds in less than 20 minutes.

But until Noah and TT can extrapolate those numbers over an extended period of time, they are worth as much as the Confederate dollar.