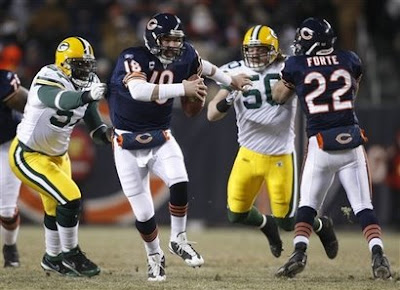 If not for his beard, I would not have been able to tell you that Kyle Orton was the starting quarterback for the Chicago Bears on Monday night for their 20-17 overtime win against the Green Bay Packers.

Orton completed 14 of 27 passes for 142 yards with 1 touchdown and 2 interceptions and a 48.7 rating against the Packers, whose defense has as many holes as the swiss cheese many of the Packer fans hold to be holy. This is only where my problem with Bears fans begins.

There is a clear double standard here when it comes to signal caller for the Monsters of the Midway. If Grossman throws those two picks last night, Bears fans would have started an effigy with a fire that would have thawed Lake Michigan. Orton's mechanics are shotty, he stares down his receivers and he can't throw the deep ball.

Devin Hester is without a doubt the fastest player on the Bears, so there should be no reason to under throw him. Unless, of course, you're not talented enough to throw the deep ball.

Yet, Orton is embraced by many as the Jack Daniels-swigging, neckbeard owning quarterback savior.

When Rex fumbles the snap, it's his fault. When Orton does it, something is wrong with center Olin Kreutz. When Grossman can't hit his receivers, he's the worst quarterback in the world. When Kyle can't hit the same receivers, the Bears need better receivers.

To me, they're the same player. And the stats would back me on this one.

Orton (career):
Grossman (career):
So, I have a question for Bears fans. Where is the proof that Kyle Orton is a substantial improvement over Rex Grossman?

orton can grow a neck beard and take swigs out of jack daniels. that's what i expect and need out of a bears qb. and who names their kid rex? what, is he gonna be a dinosaur? wtf. ORTON ORTON