Heckle Chris Paul at your own risk 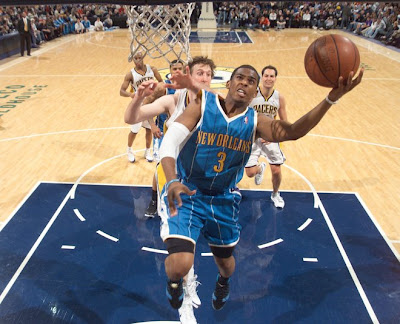 Photo Credit: Getty Images
New Orleans Hornets star point guard Chris Paul is one of those rare NBA talents that can take the game into his own hands at any time in the game. And apparently, heckling isn't going to help stop him. Paul was heckled by a few fans at Conseco Fieldhouse in a recent game against the Indiana Pacers.

After the heckling Paul proceeded to score 11 of his 19 points in the game's final three-and-a-half minutes as the Hornets pulled out the victory. The events as described in Pacers beat writer Mike Wells' blog (see, he believes in blogging!):

"The fans started heckling Paul as he waited at the table. The guys didn't say anything vulgar, but Paul leaned against the table shaking his head as he listened to every word. Paul scored 11 of his 19 points in the final 3:36 of the game. Afterwards, he ran by the scorer's table, looked up in the stands on told the guys, "That was all your fault." Great job, go ahead and get one of the league's best players worked up. The things they said weren't even funny."

Go out and learn the art of heckling. Before I put my homer-tastic qualities aside, I was known as one of the best hecklers as I learned from the Harvard and Yale of heckling schools ... Wrigley Field and the SIU Arena, respectively.

Never anything personal. Never anything crass. Think witty and think cleverly. Besides, half of these athletes don't have a brain and the other half (I'm looking at you Raul Mondesi) don't speak proper English, therefore, their responses would make no sense to you even if they tried.

And the most important key to heckling: Do your research. Hit up Google and your opposition's online media guide and you'll find dirt in a snowstorm.