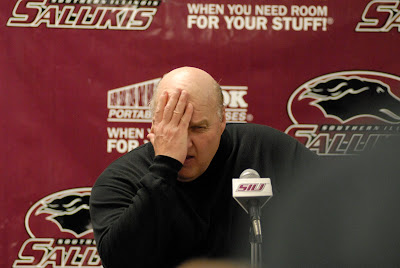 Photo courtesy of Sean McGahan, who was kind enough to shoot the SIU-SLU press conference for me. Thanks Sean! Here's some free linkage for you!
Sitting through Rick Majerus' post-game press conference after SIU downed SLU 64-48 was downright painful.

Listening to a man who sounded as if he was about to be put out to pasture after his team's most recent disappointing effort. It's a far cry from the Majerus that shined as a color analyst for ESPN's college hoops coverage. Or the coach that was eager to take the USC job before thinking twice and going back to the broadcast booth.

Remember when he was leading Michael Doleac and Keith Van Horn to the Final Four? I still can't believe that was 13 years ago. It's almost sad.

The following are quotables from Majerus' postgame presser.

"I'd be surprised if they did not win their league. They've got older players and good depth. I thought their freshmen played well. They're a good club, and I applaud them for their effort. They clearly beat us."

And then, coach goes off on a tanget Hawk and DJ would be proud of:

"I really have hated coming back to coaching for this reason. It used to be where you had six weeks and you could practice but you could. I'm giving them a lot to academics. And I'm asking them to meet at my place for lunch, all the freshman, to talk about everything but basketball. I mean, I will not bring up basketball. I'm going to talk to them about some life issues and some academic issues and you know tonight I was telling them the story about Johnnie Johnson and Freddie Brown. You know "Downtown" Freddie Brown won Big 10 championships and two Seattle SuperSonic championships and was all-pro i will never forget not retiring his number but we never got him a degree you know but tomorrow is an important day you know and i'm going to spend two hours with them explaining life skills and life situations. And ..."

See, I can't even finish the quote. Majerus rambles on about stuff I'm not sure happened. It's almost like Hawk and DJ on ChiSox broadcasts when Hawk begins skwaking about the good ol' days when Carl Yasztrzesmski roamed the earth and saved the U.S. from the Commies while batting .325 with the Red Sox.

Lost in this quote is an exchange between Rick and Tom Timmerman of the St. Louis Post-Dispatch, whose phone goes off in the middle of Majerus' monologue.

I'm calling shenanigans as he took a call DURING Chris Lowery's portion of the press conference.

Back to Majerus, who dropped this nugget and I'm not sure why:

"In the land of the blind, the one eyed man is king."

I laughed out loud for that one. It's good to see that the big guy still has a little sense of humor left in him

Then he talks about bad habits by his youngsters, specifically freshman guard Ruben Cotto:

Makes sense. Majerus was talking about Cotto's flashes of brilliance being drowned out by silly freshman mistakes, such as unnecessary shot selection and gambling and missing on steals on the defensive end.

Majerus said Cotto and several of his youngsters have bad habits that have been with them since they began playing basketball. A good example was Willie Reed's shirt grabbing in the post. Something Majerus compared to poor journalism.

"You guys are writers. You have dangling modifiers your whole life, then you're writing bullshit columns."

No, he wasn't attacking us. Obviously because he hasn't read the golden prose I put forth on a daily basis for the Daily Egyptian. He was making a point, that you can get by with bad habits all your life if you're a star (*coughJayMariotticough*) but there's a point where you can't anymore and when that point happens, you're fucked.

That's all from the land of press conferences. I'm going to bed.

What best of all, Dollar or Euro? This question worry many peoples.
But only you make your choice! Remember - your love and your personal intelligence make you rich. :)