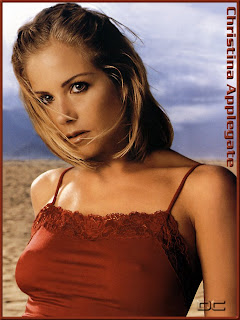 It's not often I do a Saturday edition of the Daily Dosage, but today it was necessary.

I'm spending the weekend in Indianapolis with my primary responsibility being to cover the SIU men's basketball team take on Saint Mary's College in the night cap of the Wooden Classic. And while covering Stephen Curry and Davidson go up against Purdue should be the highlight of the show, last night took the cake, no matter what happens today.

We were blessed with the opportunity to cover an NBA game Friday night as the Los Angeles Clippers beat the Indiana Pacers 119-107 in double-overtime.

So why Christina Applegate as today's Daily Dosage choice? Edyta, one of the wonderful photographers of the DE staff, approves.

Alabama defensive lineman learns why it's a bad idea to leave your Facebook open. [SportsByBrooks]

Turning Wrigley in to an ice rink. [Mouthpiece Sports]

Matt Vasgersian and the city of St. Louis. [Awful Announcing]

Sports blogger of the Year and we're not in the running. What gives? [Busted Coverage]