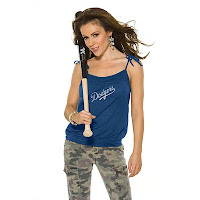 Seriously. Where is Hiroki Kuroda's unnecessarily offensive t-shirt? If he was a Cub, they'd definitely have one and if they didn't they would after Monday night's performance. Kuroda one-hit the Braves as the Dodgers won 3-0.

On the other hand, they do have the eye candy known as Alyssa Milano so I'm sure their focus is elsewhere.

Beasley 1 Rose 0. Is it too early for the Michael Beasley Fan Club to jump out of the woodwork and give Bulls GM John Paxson the "I told you so" treatment? Maybe. Nonetheless Beasley's 28 points in 23 minutes in the Heat's 94-70 victory over the Baby Bullies.

Joakim Noah was torched for most of those buckets...musta been the cognac.