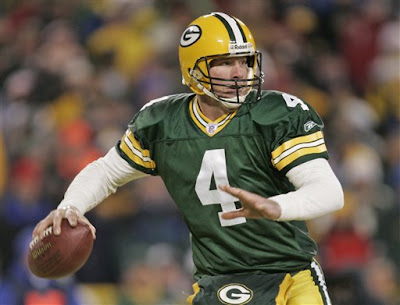 Ted Thompson and the powers that be in Green Bay are doing their best to keep (arguably) the best quarterback ever out of the city he singlehandedly put on the map.

Like when Jerrys Reinsdorf and Krause booted Michael Jordan into retirement, the Packer management is trying to keep Favre in that predicament. Sure, he announced his retirement a long time ago but nobody bought it. And if you did, I've got a bridge in Brooklyn that I'd like to sell you.

Now the Packers are, as the kids like to say, between a rock and a hard place. They've done all that they could to separate themselves from Favre as they ready themselves to hand Aaron Rodgers the key to the offense. However, No. 4 still has that itch and you know if it itches you've got to scratch it.

The dilemma is how (better yet, where) is Favre gonna scratch it?

Will the Green & Gold management swallow its pride and give the people what they want? Will they try to trade the gun-slinger elsewhere? Will they do the unthinkable and cut him?

Only time will tell. And as difficult as it might be to envision him not in a Packers uni, I know a team that resides in a stadium that looks like a spaceship from the outside that should be jumping through hoops if Favre did indeed hit the open market.

Will Brett Favre follow in the footsteps of Michael Jordan, Roger Clemens and Mario Lemieux and step out of retirement? It could happen. (Rotoworld)