St. Louis Cardinals, Come On Down! 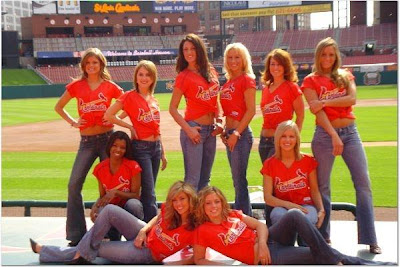 What a situation to be in if you're name is John Mozeliak.
If you're not a St. Louis Cardinals fan or a close follower of the game of baseball, you don't know Mozeliak from Moe Szyslak but Mozeliak is the Cards' general manager and in charge of putting the players on the field for Tony LaRussa to manipulate.

And when Mozeliak wakes up Wednesday morning he'll find himself sandwiched between his team's two biggest rivals who are currently involved in the greatest arms race since the Cold War Era.

On Monday, the Brewers sent a rocket into outer space and finalized a deal for the reigning 2007 AL Cy Young winner, CC Sabathia. Tuesday, the Cubs landed a man on the moon and acquired Rich Harden for four prospects.

So what should we expect Wednesday?

Will the Cards create a new civilization on Mars and somehow grab Erik Bedard from Seattle? Or A.J. Burnett from the Blue Jays?

Who knows but he has to do something, right? At 51-40 the Cards sit in second place in the NL Central and that's not bad for a scrappy team that is led by a manager known for wearing his sunglasses at night. Let's be honest, the Redbirds are playing with house money at this point of the season.

They're enjoying career years from their entire outfield, and that's with fan-favorite Jim Edmonds clubbing and fielding well with the NorthSiders.

Skip Schumaker is batting .297 and is getting on base at an impressive 36% of the time. Ryan Ludwick is an All-Star with 17 homers and a team-high 58 ribbies. And despite me knocking him for his past HGH-use "Wild Thing" Rick Ankiel has a team-high 19 home runs.

Lest we forget the all-world star that is Albert Pujols who is hitting a pedestrian .348 with 18 and 48.

But if we can expect Ryan Dempster to have his downfall, why can't we do the same with Kyle Lohse (10-2, 3.62 ERA). If Jason Marquis doesn't scare you, then neither should former Cub Todd Wellemeyer whose 7-4 record and 3.94 ERA comes as a shock to anyone that saw him pitch with the Cubs or Royals.

Wouldn't this be the perfect time to remind your two biggest rivals that you're not going anywhere?

Eh, why bother? We already know the manager is asleep behind the wheel.