Wanted: Someone That Can Provide The Big 'O' 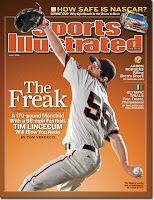 No, this isn't the tagline of a craigslist ad. Instead, it's something that the San Francisco Giants pitching staff would put in a personal ad as the G-Men search for some runs to support their staff with overwhelming stuff and underwhelming stats.

Lucky for the Cubs they get to face both Matt Cain and Tim Lincecum in this weekend's three-game set at Wrigley Field. And the fact that I'm even writing this post ensures that San Fran is bound to score 20 runs per game in support of this dynamic duo.

But let's break it down, shall we?

Tim Lincecum should be starting the All-Star Game for the National League. He's 10-2 with a 2.66 ERA. That's 10 frickin' wins on a team that has 39 wins. More than 25 percent of the Giants' wins have come thanks to the golden arm of Tim Lincecum.

Lincecum would be a deity if he was on the Cubs, Mets, Yankees or Red Sox. Instead, he's the real San Francisco treat.

Also deserving of some love is Matt Cain. Despite h is 5-7 record and 4.30 ERA, Cain is able to devastate hitters with a mean high-90s fastball and a buckling breaking ball. His problem is that he gets little to no run support, meaning he's pitching with no margin for error.

If Lincecum, Cain and Sanchez had an offense that wasn't -57 in the run differential category, they'd all be All-Stars.

Instead, it's up to Aaron Rowand, Bengie Molina and Randy Winn to put some crooked numbers on the board.

Good luck with that, boys.