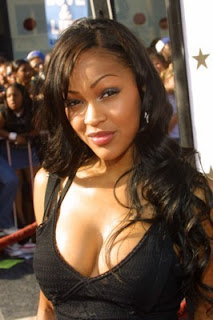 Megan Good is hot! Therefore, there is no further explanation needed for today's eye candy. Oh, but you still want one? Well, she's got a pretty face and a smoking body. Oh and she's an actress and she's stinkin' rich. Need more? Screw off and take your Daily Dosage!

Boof Bombed As Sox Stretch Lead. It's OK to back off the ledge Sox fans, the Minnesota Twins can't win 'em all. Especially if they're sending Boof Bonser to clean up Livan Hernandez's mess.

The Boofer allowed three runs on three hits, pouring gasoline on Hernandez's fire start that only lasted four innings that saw the White Sox light up the scoreboard for five runs on nine hits in a game the South Siders won 8-3 to extend their lead to 1.5 games.

Carlos Quentin went 3-for-5 with his 28th home run of the year, Alexei Ramirez hit his ninth long bomb of the year and Gavin Floyd scattered five hits in 7.2 innings to pick up his 11th win of the season.

Cubs Club Brewers, Again. Do you remember the last time the Cubs won four consecutive road games? Neither do I. To be honest, I can't remember four Cubs road victories. Nonetheless, the Cubs downed the Brewers, 7-1, to extend their NL Central lead to four games.

Ryan Dempster (12-4) picked up his second consecutive road win by punching out nine in seven innings of work. Table setters Alfonso Soriano and Ryan Theriot combined to go 6-for-7 with four walks with three runs scored and three runs batted in.

A sign that things aren't going well for the Brewer bats: starting pitcher Manny Parra went 2-for-2 with a double and a triple. J.J. Hardy, Ryan Braun, Corey Hart, Bill Hall and Mike Cameron went a combined 0-for-19 in the loss.

It doesn't look to get easier with James Richard Harden taking the mound against David "I'm Not Related To President" Bush in the series finale.