Is Rich Harden Too Good For A Pitch Count? 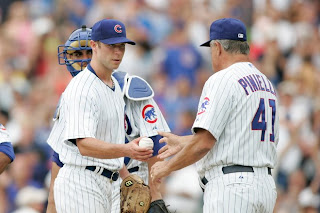 James Richard Harden takes to the mound in a few hours in search of his first win in a Cubs uniform and a series sweep of the rival Milwaukee Brewers.

The fact that he is winless in three starts as a Cub is truly criminal. How do you limit opponents to two runs on eight hits and post 30 strikeouts against eight walks and have a record of 0-1.

Manager Lou Piniella's strict pitch count seems to be stunting Harden's growth as the co-ace of the staff while putting the Cubs bullpen (shortened with the absence of closer Kerry Wood) on alert any time No. 40 takes the mound.

How could this injustice continue?

Well, going deeper into games could help bring it to an end.

See, Piniella and the Cubs are babying Harden's golden right arm (and rightfully so) in a manner in which Dusty Baker should really take note of. Despite his dominance of the Giants, Diamondbacks and Marlins, Harden is winless because the lack of run support and a struggling bullpen.

Both of those problems look to be resolved.

The Cubs have scored more runs in this series in Milwaukee than the Bears will score in Green Bay against the Packers (remember, you heard that here first). And the bullpen should be fully rested with the exception of Chad Gaudin and Neal Cotts who pitched an inning each in Wednesday night's victory.

If Harden gets the backing that Ted Lilly, Carlos Zambrano and Ryan Dempster have received in the first three games in this series, he will head back to Chicago with his first victory leaving the Beermakers drowning in their suds.