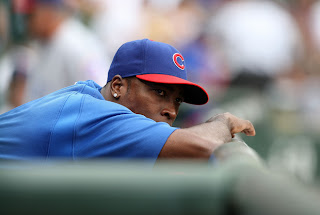 Cubs left fielder Alfonso Soriano will likely return to the line-up tonight in the series finale against the D'Bags. And not a moment too soon.

The Cubs offense is mired in a team-wide slump. Other than the nine-run outburst Sunday against the Astros, the Cubs have scored four total runs in the other four games. The worst part is they're wasting quality starting pitching.

So now that Soriano will be back in the line-up, it is up to manager Lou Piniella to figure out how to rebuild what was the most powerful offense in the NL.

I think the Cubs should maybe flirt with the idea of bumping Fuku to the third spot based on his high on-base percentage, dropping Lee to sixth based on all the double plays he's been grounding in to and putting Edmonds in the fifth spot.

Maybe just for a little bit to see the kind of spark the line-up brings. I'd also tinker with maybe Fuku in the seventh spot so when the line-up turns over, Soriano's got the high OBPs of Fukudome and DeRosa on base in front of him.