Daily Dosage: Weekends Are Made For Fun 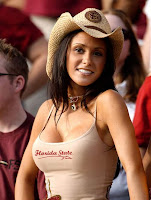 I hate Florida State athletics almost as much as any program in college sports.

Ladies and gentlemen, this is Jenn Sterger. She's hot. And even though she's not hotter than Erin Andrews, I'd give her the time of day. You'll get the reference if you click on the appropriate link below.

It's Friday, so let's keep it brief. Shall we?

Reds Play Longball To Avoid The Sweep. The Reds out-homered the Cubs 7-1 as they avoided the three-game sweep with a 12-7 victory over the North Siders. David Ross (twice), Ken Griffey Jr., Brandon Phillips, Adam Dunn, and Joey Votto.

Ted Lilly not only failed to get out of the third inning, he also failed to follow teammates Ryan Dempster and Carlos Zambrano in the 10-win club.

So Do The Royals. No, the Royals didn't run roughshot at Kauffman Stadium but outfielder Mark Teahen hit an inside-the-park home run as the Royals beat the White Sox 4-1 to avoid the series sweep.

For the first time in the series, the Royals were able to hold the lead. Finally, holding that Kansas City fans won't boo. (Yeah that was a football reference...you like?)

Hey, Now You're An All-Star. Brewers outfielder Corey Hart and Rays third baseman Evan Longoria were voted into the final slot to represent their respective leagues in the All-Star Game.

Personally, I thought Hart had no chance, seeing that he was going up against the darling of the national media, Mets third baseman David Wright. I'm also surprised that Jermaine Dye of the White Sox didn't get in. And the only people to blame for this injustice are White Sox fans.

All week I heard the South Side bitch and moan that they weren't fairly represented in the game and the Cubs didn't deserve seven stars.

Even though both are true statements, if Sox fans put as much effort into stuffing the ballot box like Cubs fans and Red Sox fans did to vote in the starters or Brewers fans and Rays fans did for the last man vote we wouldn't be having this conversation.

I'm Not Seeing This Through Rose Tinted Glasses. Derrick Rose is out for the rest of the summer league season because of knee tendinitis. I don't see where this is good for the Baby Bulls, who might as well be back at square one without D-Rose.