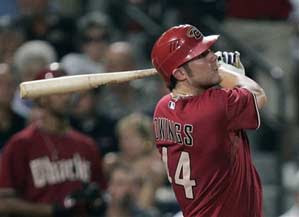 Arizona Diamondbacks pitcher Micah Owings is Exhibit A on why the American League should abolish the designated hitter.

On the other hand, that might be where he best helps his team.

Owings was sent to the D'Backs minor league affiliate in Tuscon to hone his pitching skills. And to be honest, he needs a little more than some fine tuning.

In his last 12 appearances (8 starts), Owings is 0-7 with a 9.21 ERA. In his most recent start against the San Diego Padres, who go to the plate swinging a wet newspaper (except Adrian Gonzalez), hit two home runs en route to scoring eight runs in the three innings Owings pitched.

The Padres can't score eight runs in a week, let alone in one game.

Now that he's toiling away in Tuscon, the Diamondbacks could use the time to take him to the Rick Ankiel School Of Redefinition: Outfield 101. Hell, he could play the outfield between starts if they want him to pitch so damn badly.

Owings has a career .313 batting average and .895 OPS and would look better hitting in the middle of the Diamondbacks line-up than facing the opponents heart of the order hitters. He's got five home runs in 112 at bats.

Extrapolate that over 650 ABs and you've got 29 home runs and 104 runs batted in. That would fit in quite nicely with what Connor Jackson, Chris Young and Chad Tracy are doing.