Is Jeff Samardzija The Answer? 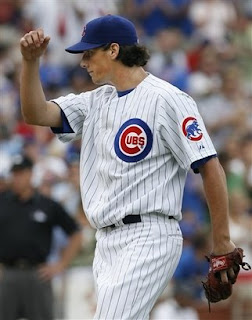 Does anyone know what has happened to Bob Howry?

In 2007, he was part of the bullpen triumvirate that included Carlos Marmol and Kerry Wood that was in charge of getting the ball to closer Ryan Dempster. And as the '08 season began, he was a popular choice to win the closer's role because of his past experience in the role.

Enter Jeff Samardzija, a fifth-round pick that comes with more hype than any non-first-rounder should come with. "The Shark" was a star wide receiver at Notre Dame, but he turned down the chance to be a sure first-round pick to try his hand at the game he loved and ended up being drafted by the team he grew up cheering for.

At a galnce, the move looked like a classic Cubs/TribCo public relations love fest. In the long run, it might be more than that.

And while the Wrigleyvillians are ready to anoint the former standout wide out as the closer of the future, Samardzija could be to the '08 Cubs what Joba Chamberlain was to the '07 Yankees.

Chamberlain was the Yankees' prized pitching prospect who was called up to the big club August 7 to help bridge the gap between the starting pitching and closer Mariano Rivera. General Manger Brian Cashman's "Joba Rules" helped ease him into the show.

Maybe manager Lou Piniella will lean on the youngster from Merriville, Ind. to do the same. And it's not like Piniella hasn't pulled this trick before. Marmol was a starter under Dusty Baker, but Piniella moved him into the bullpen and the Cubs have reaped the benefits ever since.

Howry's struggles are mostly due to a high opponents batting average (.305) and giving up more hits (63) than innings pitched (51). Samardzija can be the answer to some of the Cubs' bullpen woes because he possesses what Howry doesn't--the ability to miss bats. In the smallest of sample sizes, Samardzija has five strikeouts and zero walks in four innings pitched.

Can the Cubs, who have developed their fair share of pitching prospects for the rest of baseball, use the perfect storm of Samardzija's hype and electric stuff to propel them to the promise land?

It's too early to tell, but after collecting his first save Sunday against the Marlins, the sky might be the limit.