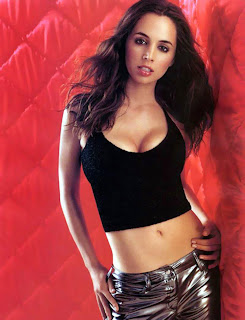 Welcome to the 100th post in TBDS history. I'd like to thank my mom, Jesus, Matt, Jon, I Am Legend and the four of you currently reading this site. Helping us celebrate this momentous occasion is Ms. Eliza Dushku, whose appearance as the eye candy opposite Kirsten Dunst in the horrifically wonderful 'Bring It On' made it the best movie ever to watch with the sound off.

Awe Sheets! Cubs Take Game Two. The pitching duel between the Brewers' Ben Sheets and the Cubs' Carlos Zambrano lived up to its billing through five innings Tuesday night. After the sixth, you wouldn't have known it ever existed.

The Cubs beat the Brewers 7-1 behind RBI hits by Kosuke Fukudome, Mark DeRosa and Zambrano helped chase Sheets in the sixth to extend the lead to 6-0. Alfonso Soriano's sacrifice fly to center capped the Cubs scoring.

As for Big Z's performance on the mound: 8 innings 5 hits 2 walks 9 strikeouts were good enough to move his record to 12-4.

Piranhas Nipping At The Sox's Heels. Gone are the days of Johan Santana and Torii Hunter torturing the Sox. Unfortunately for the Good Guys in Black, Justin Morneau is still around.

The Home Run Derby champ's bases clearing double capped a five-run fifth inning as the Twinkies overcame a 4-0 deficit to top the Sox, 6-5. The Sox's lead is down to 1/2 game.

Nick Swisher's broken bat homer in the ninth off Twins closer Joe Nathan brought the Pale Hose within a run, but it wasn't enough as Carlos Quentin grounded out to end the game.

Deng, That's A Lotta Money! Bulls forward Luol Deng, who was the latest NBA free agent to flirt with the Euro, has reportedly agreed to a six-year $71 million dollar contract extension to stay in Chicago.

Deng's 15.6 points per game and 48 percent shooting from the field might get a boost with the addition of No. 1 overall pick Derrick Rose and the Phoenix Suns-like offense Vinny Del Negro wants to implement with the Bulls.