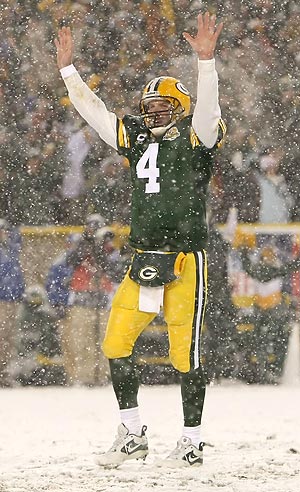 It's a great honor for me to be invited on the best blog on the web. It's a tremendous accomplishment, one of my biggest yet on this planet. I have to thank Matthew Hartwig and Luis Medina for allowing me to contribute here. I'm quite sure they'll get sick of my witty, sarcastic, and snide remarks, but what's the fun if there isn't any of those remarks?

So now it's time for me to pop my blog cherry. For good reason, this blog has a Chicago-style theme to it. Unfortunately for those Chicago fans, I don't share the same taste when it comes to my football teams. I like my football of the green and gold variety. I like my football that has the passion and the tradition of winning. I like the GREEN BAY PACKERS.

And today in Titletown USA, rumors continue to swirl that the one and only Brett Favre will renounce his plans to try out for the PGA Tour and instead try for one last Farewell Tour at a Super Bowl. This comes on the heels after the Milwaukee Brewers finalized a deal that netted them big guy and pitcher C.C. Sabathia. But as it goes in the old cheese state, football is king. Even in July when it is a complete dead period for football, rumors of Favre coming back took center stage over Sabathia's arrival. And of course, there's a twist that comes with it. Favre could come back, but not as a Green Bay Packer.

As Shaggy would say, "WHAAAAAAAAAAAAAT?" I'll tell you why Favre won't go anywhere else besides the Packers, if he does indeed come back to the National Football League. Close Favre friend Al Jones, a writer for the Biloxi Sun Herald, says that while Favre is working out daily and trying to get back into "game shape," there is no way that he would play for any other team besides the Green Bay Packers. And why wouldn't that make sense? Here's a guy that is going to be 40 years old in a couple of months. When Mike McCarthy installed the west-coast offense into the Packers' playbook, Favre absolutely hated it. He did not want to learn a whole new playbook for his final couple of years in the league. So would he want to do the same thing if he went to another team? His family has been embraced by the Wisconsinites for 16 years. Favre's family has said repeatedly that they love it in Green Bay. Both of his daughters wanted him to keep playing as long as he possibly could, in Green Bay. I don't think any of that has changed.

Of course, there's one small obstacle to all this. Meet Packers' General Manager Ted Thompson. Thompson got off to an extremely rocky start with the fan base when he took over the team as the team embarked on a 4-12 record his first year at the helm in 2005. However he won the NFL Executive of the Year award last season after the Packers compiled a 13-3 record, flanked by the youngest team in the NFL (even with Favre on the team). But Thompson's entire reputation in Wisconsin is at stake on this one move. No one doubts Thompson's drafts anymore. No one doubts his inactivity in free agency anymore. But if Thompson says no to Brett Favre coming back because they already promised Aaron Rodgers the starting job, you can bet he'll be on the hot seat faster than a brat going through an overweight Wisconsin man.

Personally, I have bought into Aaron Rodgers as the starting quarterback. And really, how can you not when you see the other quarterbacks in the NFL's Norris Division? There's a big difference in being a playoff team and a Super Bowl team. Even though the Vikings made a big improvement by acquiring Jared Allen to help their pass defense, they still have Tarvaris Jackson as their quarterback. Defenses are still going to run the gauntlet and put eight or nine men in the box to stop the two-headed attack of one Purple Jesus and Chester Taylor. The Packers have the same team as last year, with the exception of Favre. Rodgers' ability fits perfectly into a west-coast offense. He gets rid of the ball extremely quickly, he's accurate, his throwing motion fits best in a system that uses screens, slants, and outs.

There's one small problem though. The Packers' probably wouldn't be a Super Bowl team with Rodgers as the quarterback. I don't think there's any chance that they would get by the likes of the Cowboys or the Giants in the playoffs. Favre, on the other hand, makes the Packers a Super Bowl contender. He was the only other player in the NFL to receive a vote in the MVP voting last year as he put up one of his best statistical years in his NFL career. At age 39. The ol' gunslinger still has it and could probably play for another five years if he wanted to. Ultimately, I believe that Favre had a talk with his close buddy Michael Strahan and Strahan probably told Favre how great of a rush it was to go out on top. Favre's the biggest competitor in the game. There's no way he wants to go out with an interception to Corey Webster in overtime of the NFC Championship Game. He won't go out that way. Thompson will make the right decision, save his home, his family, and his well-being and Favre will lead the Packers to the promised land.