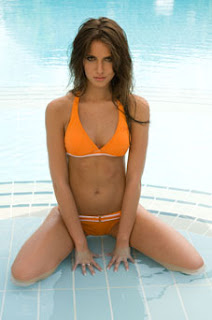 Poor Dan Uggla. He makes three errors in the All-Star Game after making only three during the first half of the regular season. On top of that, Uggs went 0-for-4 with 3 whiffs while leaving a small village on the base paths.

Did nerves get the best of Mr. Uggla? Or was it the Yankee Stadium ghosts' revenge on the Marlins for clinching their 2003 title at The Stadium.
Maybe an evening with Miss Italy, Claudia Ferraris, would cheer him up. But, until that time comes, I hope this picture is sufficient enough.

Chi-Town Stand Up. The Cubs pitchers who played in the Midsummer Classic did their part to help the NL get the home-field advantage. Carlos Zambrano, Ryan Dempster and Carlos Marmol combined to strike out 6 batters in their four innings of work.

How about Dempster striking out the side in the bottom of the 9th? Wish that woulda happened more often in the past few years. How about Marmol punching out the Sox' Carlos Quentin? Here's hoping that Carlos shows up in the second half for the North Siders.

His Name Is (Now) Dan Uggly! I hate to rail on the kid, but I kinda feel bad. Especially after Ken Rosenthal said that it was his dream to play at Yankee Stadium in front of his pops. That dream quickly turned into a nightmare.

The Closer, Starring The AL Bullpen. Joe Nathan, Francisco Rodriguez, Mariano Rivera, Joakim Soria and George Sherrill combined to throw 5+ innings without allowing a stinkin' run. On the NL side, Billy Wagner and Brad Lidge combined for a 40.50 ERA.