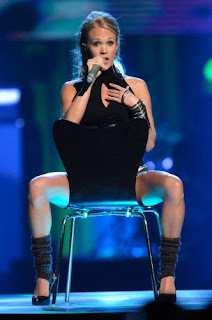 Tony Romo, you're a f*cking ballhog! You're currently dating Jessica Simpson and that's fine and dandy because her daddy's a nutcase and I just don't feel like dealing with nutcases from Texas because that's not my style. But, the fact that you also dated the wonderfully delicious Carrie Underwood just sickens my stomach. Does anybody besides me notice that Romo has dated two of the hottest women in America today, yet he still has two less playoff victories than Rex Grossman? Hey Tony, put in a good word for me with Carrie and we'll forget that this rant ever happened.

WTP. WTF? As a Cubs fan, you're trained to watch the kind of baseball that makes you want to rip your hair out on a daily basis. Monday night's game was no exception. The Cubs and D'Bags combined to collect four hits in nine innings of baseball. Luckily for the Bags, their two hits scored the two runs that gave the North Siders their third loss in four games since the All-Star break.

And while Rich Harden has proved to be a great investment in his two starts as a Cub (12.1 IP 20 K 0.90 WHIP), Randy Johnson still owns the Cubs as he moved his record to 13-0 in 14 career starts against them.

Fellow AL All-Star outfielder Carlos Quentin of the Sox also homered, but it wasn't enough as the Sox fell, 6-1.

Paid In The Shade. Bears linebacker Brian Urlacher got the raise that he wanted. The team agreed to terms that included a $1 million yearly raise for the next four years with the former defensive player of the year on Monday.

And while the pay hike will look good to Urlacher now, just wait 'til his babys mommas get ahold of the news that daddy's got some more attainable income.

have to disagree. Carrie and Jessica arefar from the two hottest women in America