Daily Dosage: "What Happened On The Field" Edition 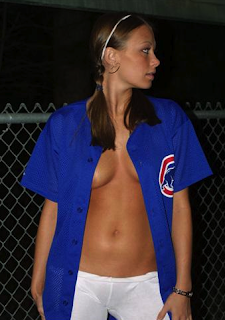 The 4th of July may have been on Friday, but the fireworks were definitely saved for Sunday where the off-the-field stuff probably made your head spin. Fear not, for they still play the games on the field.

Sean Marshall picked up his first win Sunday and Carlos Zambrano moved his record to 9-3 in his return from the DL behind the strength of solo homers by All-Stars Kosuke Fukudome and Geovany Soto.

The Cubs were this close to a three-game sweep, however an HGH-assisted three-hit game (which included a homer and a game-winning two-run hit) by outfielder Rick Ankiel helped the Cards salvage the middle game.

ChiSox Fight Back To Salvage Split. After losing the first two games to the Oakland A's, the White Sox defeated the Athletics in the final two games of the series 6-1 and 4-3.

Rose v. Beasley Round I. Like Bird and Magic, Peyton Manning and Ryan Leaf and Joe Mauer and Mark Prior, Derrick Rose and Michael Beasley will forever be linked for better or for worse. So it only makes sense that Rose and Beasley will match-up in their first summer league games.

Why do I have a feeling that it's going to be one of those long-standing arguments for years to come?

Hockeytown To Meet Wrigleyville? A recent report states that the Chicago Blackhawks will host the Detroit Red Wings in the NHL's third outdoor game on New Year's Day at Wrigley Field.

Why do I have a feeling that John McDonough's ties to the Cubs and the folks at Tribune Tower had a little something to do with swinging this deal?