Who's Ready For A Mediocre Offense? 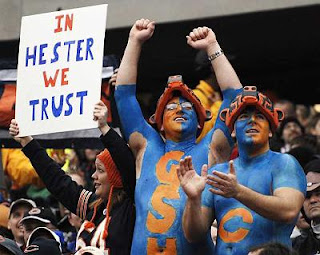 The Yahoo! Sports team ranks the Bears as the 32nd best offense.

Wait, what do you mean there are only 32 teams in the NFL?

I guess the signing of Kevin Jones isn't going to bump the Monsters of the Midway up the list.

The Bears could have Moss and Owens split wide, but it wouldn't matter because "Rex is (still) our quarterback." Some Bears fans have the gall to think their team is better off with Kyle Orton's Neck Beard at the helm because he doesn't throw the picks Grossman does.

The running game, which is supposed to be the bread-and-butter of Chicago Bear football, is laughable. They passed on Rashard Mendenhall, a local product who ran wild against the pro team that is the USC Trojans, and drafted a running back who starred in Conference USA. How many Conference USA Pro Bowl running backs are there?

The aerial attack went from bad to worse when the team's only deep threat and Grossman's favorite target (Bernard Berrian) jumped ship to the Minnesota Vikings party boat. In response, the Bears re-acquired Marty Booker, a possession receiver expected to be a No. 1 and Brandon Lloyd, who hasn't been a No. 1 target since that intramural flag football team he starred on at the University of Illinois.

The only skill position in which the Bears have a plus talent is at the tight end slot. Greg Olson has tremendous upside and a flow Lil' Wayne would be envious of. Unfortunately, Desmond Clark is stunting his growth.

Stat Check: 3. The number of legs Olsen admits to having in the NSFW song.

And that's probably not a stretch.