Dusty Baker Is At It Again 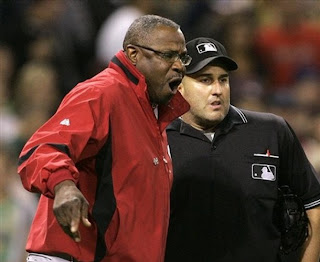 Pitchers of Cincinnati, protect your arms. Dusty Baker is on the loose.
Lost in the Rich Harden buzz was the fact that Reds manager Dusty Baker is making his second trip to Wrigley Field this season. Thankfully (for Harden) Dusty is managing the Reds, not the Cubs.

And I know that there are a lot of people that love Dusty, and I think those people are idiots. Yeah, sounds blunt, but they are.

Sure, Dusty won 840 games in San Francisco, but so could I if my team was lead by the HGH-assisted numbers posted by one Barry Lamar Bonds from 1993 to 2002.

So that brings us to the present, where Dusty Baker is 43-49 and must be living through a nightmare. He has asked Adam Dunn and Edwin Encarnacion to sacrifice just to see them hit game-winning homers. After blocking top prospects Joey Votto and Jay Bruce, he's jerking them around the order. He oversaw his team bat out of order (thanks to Corey Patterson) on May 12th. Think that's not a common occurrence? Not for Dusty, because it happened when he was in San Francisco and in Chicago.

And as much of a nightmare as it is for him to manage them, the feeling must be mutual for that Cincy pitching staff.

Let's take Aaron Harang for example. Coming into this season, he was making a name for himself as a certified ace and strikeout machine. He won 16 games in 2006 and 2007 on some cruddy Reds teams while striking out 484 batters and compiling a respectable 3.74 ERA in that time. Those are some pretty impressive numbers if you take into consideration half of those starts had to come in the hitter friendly Great American Ballpark.

And this year, Harang looked to be back on his grind. Even though his record was 2-6 after 10 starts his ERA was still respectable (3.50) and was still racking up the punchouts (63 in 74.2 innings).

Everything changed May 25. In a game the Reds eventually lost 12-9 in 18 innings to the San Diego Padres, Baker used Harang (who volunteered himself) for FOUR innings on three days rest where he struck out nine batters in the process to preserve the tie.

Since that game, Harang is 1-5 in the eight starts since that date. He's pitched seven innings only twice and has allowed 36 earned runs in that span of games. His ERA (which stood at 3.32 after the extra inning appearance) has ballooned to 4.76.

Oh and don't think that kind of treatment hasn't rubbed off on the youngsters too.

Since that game young stud pitcher Edinson Volquez has seen his ERA go from 1.31 to 2.36. By the way, he took the loss in that game pitching 1.2 innings.

Dusty Baker seems hell bent on turning Harang and Edinson Volquez into Kerry Wood and Mark Prior. Want proof? Reds fans, unless you love pain, I suggest you scroll down past the italicized section.

“Almost all foreign pitchers throw more than American pitchers,” he added. “Rarely do you hear anybody say some American pitcher has a rubber arm.” Bronson Arroyo was mentioned and Baker said with a sly grin, “He’s Cuban.” Actually, he was born in Key West. “Close enough. Key West is as close as you can get to Cuba,” he said.

Wow! That's almost as silly as rationalizing starting Lenny Harris because black players were bred to work in the heat because "that's why they brought us here."

I didn't know Dusty was a great historian.

I did know Dusty wasn't a great manager.