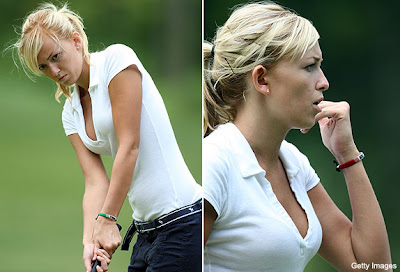 Today the big picture will take a backseat to the local focus even though today's pic takes us all the way to Canada and Wayne Gretzky's hot daughter. (Tip to TBL!)
Lefty Lumber Lifts Chicago Baseball To Victory. Game-winning home runs by A.J. Pierzynski and Mike Fontenot lifted their respective teams to victories over the Cleveland Indians (6-5. F/10) and San Francisco Giants (6-5. F/9).

A closer look at the numbers brings to light a different story.

If you are looking at Pierzynski's numbers (.300/7 HR/32 RBI) you probably think this guy has a valid argument on why he should be making the All-Star team. Unfortunately for A.J.P., he already used his 15 minutes of fame to land in an All-Star Game with that cockamamie "Punch A.J." campaign that ex-Cub Michael Barrett apparently took to heart.

As for Fontenot, his game winner ups his numbers to .256/5 HR/16 RBI and even though he's closer to making the Little League All-Star team than the NL squad, it's good to see the little guy provide pop off Lou Piniella's bench. The former LSU Tiger might be the best thing to come out of that Sammy Sosa deal, because that Jerry Hairston Jr. thing never really panned out.

If Rose Is The Savior, Then Who Are The Apostles? The Derrick Rose era begins tonight in the first of five practices in Orlando, Fla. He will be joined by teammates Joakim Noah, Aaron Gray, Tyrus Thomas and new head coach Vinny Del Negro. However, it is who will join Rose come November that has Bulls fans anxiously waiting the Red & Black to make a splash in free agency.

Former Bull (and No. 1 draft pick) Elton Brand immediately comes to mind, seeing that he is a low-post scoring machine who puts up 20 points and grabs 10 boards like clockwork. But the recent signing of Baron Davis could help lure Brand into returning to the other L.A. franchise.

Maybe GM John Paxson should resolve his in-house matters first before he dips his toe into the shallow free-agent market. Will he re-sign Luol Deng? What about Ben Gordon? Both? Neither? Will he be able to unload Kirk Hinrich? Or Tyrus Thomas? Or Joakim Noah? Or Larry Hughes?

As of right now there are more questions than answers at the Mad House on Madison Street.

Forte Finally Signs. Bears running back Matt Forte shot up the depth chart Wednesday and all he had to do was sign his name on a piece of paper. The second round pick out of Tulane inked a four year deal worth $3.7 million.

Forte's competition for the No. 1 spot at the tailback position is "The Other" Adrian Peterson and last year's third round pick Garrett Wolfe. There are free agents to be had such as Kevin Jones and former NFL MVP Shaun Alexander. With that said, the McCaskey Family just hid another $20 million to keep away from GM Jerry Angelo and President Ted Phillips.

Oh and the guy that the Bears drafted for said running back...still has yet to be signed.