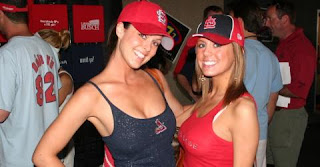 The St. Louis Cardinals won a baseball game behind the strength of an Aaron Miles walk-off grand slam. You're kidding right? I'm sure that made these girls quite happy. You know what would make me happy? A situation that involves myself, those girls, a bottle of Patron and Barry White's greatest hits.

Stop Me If You've Heard This One Before. It looks like Kerry Wood is going to visit the DL for the 12th time in his star-crossed career. The flame throwing closer has been sidelined with blister issues on his right index finger and now it looks like the only thing that can heal it is some time off.

Carlos Marmol, your time has come. Marmol was the popular choice in Spring Training to win the closer's role, and that popularity grew as Marmol man-handled the opposition while Wood struggled early.

Since that time, it's been a bit of a role reversal. Wood has a solid grasp on the job, converting 24 saves this season. Marmol has struggled of late, seeing his ERA balloon past the 4.00 mark.

Expect Marmol to assume his new duties beginning tonight in Arizona against the Diamondbacks...where last we saw him, he was giving up what would turn out to be game-winning home run.

It's A Celebration, Bitches. Congrats go out to one of the greatest hitters in the history of the Chicago White Sox. Harold Baines was honored with a statue at U.S. Cellular Field joining former star players Minnie Minoso, Carlton Fisk, Billy Pierce, Luis Aparicio and Nelly Fox in being immortalized in bronze.

Baines collected 2,866 base hits, posted a career .289 batting averagewith 384 home runs and 1,628 runs batted in during his 22-year career. Those numbers are usually reserved for sure-fire hall of famers, but Baines might be snubbed, seeing that he spent most of his career as a designated hitter.

One must wonder who will be the guy who paves the way for DHs to make the hall? It looks like it's up to an elite hitter such as Edgar Martinez or current greats like Jim Thome, Frank Thomas and David Ortiz to do the job that Harold made famous.