Shows What They Know 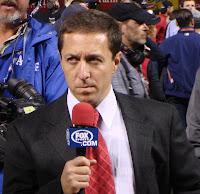 I had a man who was working at the Taste of Chicago's Chicago Tribune booth tell me that no matter what I know now it's going to be a long haul to the top of the sports journalism world.

Dare I say that trip is a bit shorter now?

From Tuesday's Dan Patrick Radio Show (where he's interviewing FOX Sports' Ken Rosenthal on who will or will not be traded.

Dan: Rich Harden?
Ken: No. He's under contract until '09 and no one's going to pay Billy Beane's price.

Oops! Mr. Rosenthal, Peter Gammons you are not!

So...um...ready to move me up the sports reporter food chain yet?