How The ChiSox Will Win The Central? 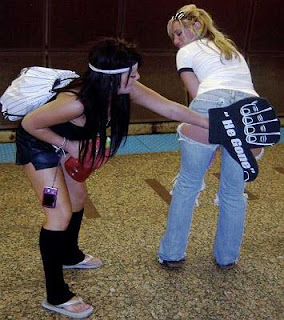 Step One: Have these girls distract the opponents. Whether it be by sticking them in the bleachers, on the jumbotron or at the visitors hotel...just do it! If that fails, read on...

Surprise, surprise. The Chicago White Sox are leading the AL Central going into the unofficial second half of the season. The Sox have surpassed all expectations, thanks in part to the players acquired by GM Kenny Williams in the past two seasons.

Outfielder Carlos Quentin is leading the team in home runs (22) and runs batted in (70). Infielder Alexei Ramirez is the team's shortstop of the future currently playing Gold Glove-caliber second base. Reliever Scott Linebrink sports a 2.37 ERA. And starters John Danks and Gavin Floyd have combined for 17 wins at the break.

Yet, there is concern in Bridgeport.

The struggles of captain Paul Konerko seem to be holding back the team, according to every Sox fan that calls up sports talk radio. They might have a point, if you take into consideration he has almost as many strikeouts (51) as hits (55).

How Will They Overcome? By attempting to do what they did in '05, and that's out pitch the competition. Danks, Floyd, Mark Buerhle and Javier Vazquez will have to carry the load, and lucky for the Sox, both the latter and the former have the abilities to do so.

Javie is a strikeout machine, punching out 8.7 batters per nine innings and Buerhle is starting to earn that crafty lefty label as he avoids the big inning. If Danks and Floyd can continue and build on their first-half success, they will be able to hold off the Twins and the too-late Tigers.