Baseball's Most Valuable At The Break 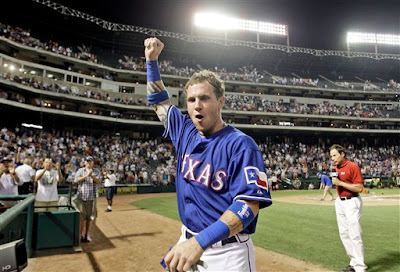 If the season ended today...
...the NL MVP would be Albert Pujols.

Nobody has done more than less than Mr. Pujols. He's hitting .350 with 18 homers 50 RBIs with a 1.074 OPS. That's sick, especially if you take into consideration that Skip Schumaker is his table-setter and his protection is Troy Glaus.

...the AL MVP would be Josh Hamilton.

At this pace, the man nicknamed The Natural is making Brock-for-Broglio look like an even deal. Hamilton's batting .310 with 21 home runs and 95 ribbies and that's sick. Those are the types of numbers players put up over 162 games, not 93.

...the NL Cy Young would be Tim Lincecum.

Apologies to Brandon Webb (13 wins at the All-Star Break) and Edinson Volquez (league-low 2.29 ERA), Tim Lincecum is the winner deserving of a chicken dinner.

The 5-foot-10 strikeout machine (135 punchouts) has 11 wins despite the run support of an offense that comes to the plate swinging a wet newspaper. He's got the second best ERA in the league (2.57) and he's 8-1 on the road.

...the AL Cy Young would be Francisco Rodriguez.

Some of you laughed at me when I picked K-Rod in the fourth round of my fantasy baseball league. 38 saves, 43 strikeouts, and a 2.36 ERA later, it looks as if I've got the last laugh heading into the All-Star Break.

...the NL Rookie of the Year would be Geovany Soto.

Ever since he hit the only home run during the Cubs' brief playoff appearance in 2007, Geo Soto's star has been on the rise. He's got 16 homers and 57 ribs and he handles a pitching staff that has four All-Stars. Oh and by the way, he's the starting backstop for the NL in the All-Star Game and that has never happened before.

...the AL Rookie of the Year would be Evan Longoria.

Think about how good his numbers would be if Longoria would have broken spring training with the big club? .275 16 HRs 53 RBIs and a .863 OPS from a rookie at the hot corner is special. The idea that his potential this year could include 30 homers and 100 ribbies while hitting at the dreadfully awful looking Tropicana Field is mind-boggling.

...the NL Manager of the Year would be Tony LaRussa.

Some of you must be scratching your heads. Yeah, I'm giving LaRussa the award based on the fact that the Cards have 53 wins and are only 4.5 games behind the Cubs (who should be running away and hiding from this division).

...the AL Manager of the Year would be Joe Maddon.