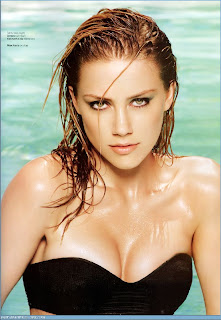 Seth Rogan has got to be one of the luckiest actors on the face of the earth. How do you follow a love scene with the beautiful Katherine Heigl in the hit movie 'Knocked Up'? Well, how about co-starring with the equally beautiful Amber Heard in Pineapple Express. I don't know if there's a love scene, but who cares. She's HOT! This pic alone makes me wanna go pick up a Maxim.

Pay The Man, Already! Usually I start these things with a recap of what happened last night with Chicago's baseball teams, but its football team is in a major pickle. I believe that players should honor their contracts, but when a player outperforms his/her rookie contract, a renegotiation should take place.

And when this player is insulted by the fact that he makes only $445,000, I usually ream him into the next decade. But when this player is Devin Hester, known as the best return man in the history of the NFL entering only his third year of pro football, you must reward him handsomely. Right? He's the Bears only offensive threat and all it takes is the stingiest management in football to screw it all up.

Hester is far-and-away the most important player on the roster. If he gets the ball, he's taking it to the house. If he doesn't, the offense gets great field position. And when the 'O' goes three-and-out or turns it over, Mike Brown and Nathan Vasher have a shorter distance to go for their Pick 6s.

Everyone's a winner when Devin Hester is on top of his game. Reward him A.S.A.P.

Sweet Home Chicago. The Cubs' 2-4 road trip was disastrous to say the least. Despite getting solid starting pitching, 19 of the team's 23 runs came in its 9-0 win against the Astros and its 10-6 win against the D'Bags. Thankfully for the North Side Nine, they were back in the Friendly Confines of Wrigley Field to deliver their 38th home victory, a 6-3 triumph over the Marlins.

It was the first time the Cubs beat the Marlins since Game 4 of the 2003 NLCS. I kid. It just seems that long, seeing that the Fighting Fish swept the entire season series in 2007. And that Marlin team sucked!